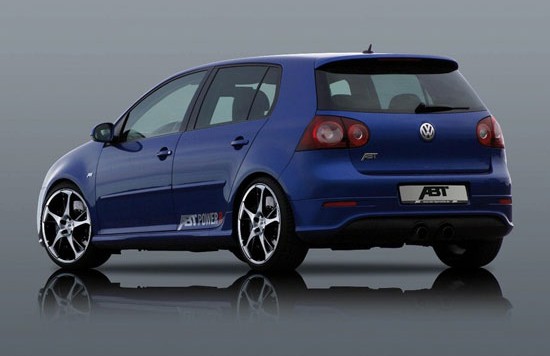 German tuner Abt Sportsline have gone to town on Volkswagen’s fastest Golf model. The Abt R32 is the ultimate expression in performance for the everyday. Compact Golf dimensions and the R32’s renowned sporting setup, the model is an ‘ideal basis’ for the tuner. “Whoever wants such a Golf wants an extremely fast compact car,” says Hans-Juergen Abt. And it’s evident the clientele won’t go disappointed.

Horsepower raises from a leisurely 250 hp in production form to a rather more Abt 370 hp, the 120 hp hike achieved via a modified motor management system and the introduction of an Abt compressor kit with supercharger and air cooling system. The upgrades power a hike in top speed to over 270 kph (or 168 mph), while acceleration to 100 kph or 62 mph decreases from 6.2 seconds in production form to just 5.0 seconds.

The same dynamic performance is delivered both on the Autobahn and on winding country roads thanks to Abt’s sports suspension kit, ‘perfectly harmonising’ with all 370 horses of the Abt R32’s V6 engine.

An extraordinary vehicle is kitted out as such, primarily featuring 19-inch wheels and Abt decals but otherwise including only subtle bodykit modifications. A new side skirt and blackened once chrome dual exhaust pipes are the principle alterations. No details on any interior upgrades or kit release dates have been announced.

2 Responses to Abt Sportsline Golf R32