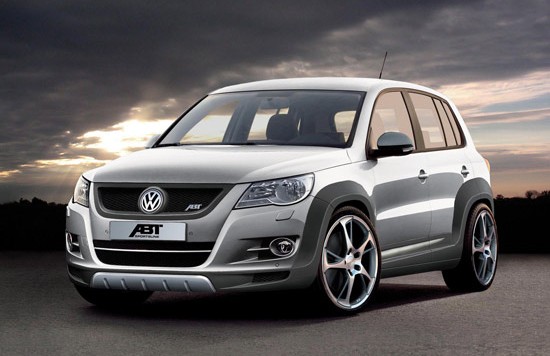 The SUV family from the Allgaeu region gets a sleek increment. The new Abt Tiguan is more than the “small” brother of the successful Touareg. The car presents itself very self-contained in technology and form. “With its straight lines and curves at the right place it is a very likeable car,” says Hans-Jürgen Abt. The managing director of the successful Allgäu-based company is convinced that the Abt Tiguan will become a big hit.

Actually the designers from Kempten tailored a body kit for the newcomer which underlines the dynamical car body and the powerful appearance of the many-sided automobile. The single components perfectly harmonize with each other. Front spoiler and front grille accentuate the impish face and let it look considerably more aggressive. Thanks to the fender extensions the Abt Tiguan appears even more brawny, the door strip attachments in the entry area take up the hip bend of the serial car. Rear skirt and rear wing form a suitable rear view of the overall successful car. Both perfectly harmonize with the 4-pipe rear muffler, also optimized in sound for the Diesel so that the self-igniting engine sounds really aggressive and sporty.

Recommendable as perfect completion are the noble wheels from Abt Sportsline. If the owner of a Tiguan decides for the classic AR or the new BR wheel with its expressive, corresponding spokes, is a matter of taste. And so is the size of the wheels, available in 18, 19 and mighty 20 inch. Of course, also complete wheel-tyre sets can be ordered. 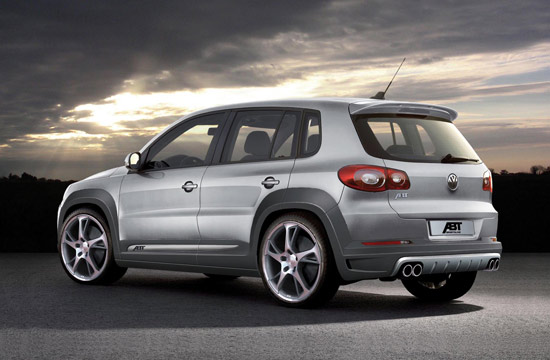 But the Abt Tiguan not only looks powerful, its riding qualities authorize it to be a sporty car for all opportunities. No matter which motorization the Tiguan driver chooses, in the Allgäu one always gets a significant power increase. This means, the power of the 1.4 TSI will be increased from serial 150 hp (110 kW) to 200 hp (147 kW). And the Turbodiesel with two liters cubic capacity then offers 170 hp (125 kW) instead of 140 hp (103 kW). If more is demanded, Abt Power S with the new Abt Turbo comes into consideration. Then, in the 2.0 TDI (147 kW) engine, 200 Diesel horses come into force, noticeably pushing the car. Thanks to the suspension springs and the adjustable sports suspension from Abt, the Tiguan brings its power onto all lanes and offers a lot of driving pleasure, especially on curvaceous country roads. Due to the fact that such an active car must remain controllable in every situation, the team from Kempten installed the Abt brake system, measuring 345 x 30 millimeters, in their compact SUV.

The latest member of the Kempten SUV family is easily able to get out of the mighty shadows of the Abt Touareg and Abt AS7 because the Abt Tiguan is a compact extra class of its own.

3 Responses to Abt Tiguan