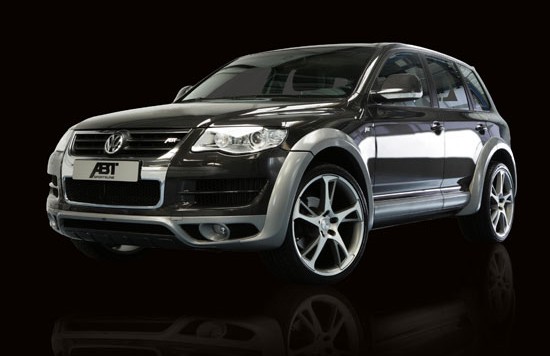 ABT Touareg 3.0 TDI with power upgrade

The three liter diesel engine by the Volkswagen group is exactly the right engine for the Touareg and the Q7; the torquey engine gives the elegant 2.5-ton SUVs great momentum. Even more so with Power S by ABT Sportsline, as Power S increases the diesel’s performance from serial 225hp/165kW (Touareg) and 233hp/171kW (Q7) to impressive 300hp/221kW. This plus in power of more than 30% also affects the torque; instead of serial 500Nm, now 600Nm provide for enormous thrust. ABT AS7 and ABT Touareg 3.0 TDI have enough power reserves at any time, and the 300hp of the diesel perform very well even in the low rpm-range: from 0 to 100km/h in 8.2 seconds (Touareg) and 8.5 seconds (AS7) – these Allgäu SUVs are not only strong athletes but also good sprinters. The top speed is 214km/h (Touareg) and 222km/h (AS7).

In order to keep the heavy and fast vehicles controllable at any time, ABT Touareg and ABT AS7 are equipped with the ABT sports brake system, which provides appropriate brake force thanks to a disc diameter of 380mm and six-piston calipers. The ABT suspension is tuned perfectly to the dynamic character of the elegant SUVs from the Allgäu. For SUVs equipped with air suspension also the innovative ABT Level Control (ALC) is available – comfortable and at the same time sportily tuned.

You can see how much driving pleasure AS7 and Touareg 3.0 TDI offer, even when the cars are standing still: ABT Sportsline has developed elegant complete sets consisting of front spoiler lip, side sills (AS7), fender extensions, rear wing and rear skirt for both heavy weights. Rear wing and rear skirt harmonize perfectly with the ABT-specific 4-pipe exhaust system. As icing on the cake we recommend 20 or 22-inch BR-wheels. With their corresponding spoke pairs, these wheels accentuate the dynamic design of these two extraordinary vehicles. After all, the “S” in SUV stands for “Sport” – and this is particularly true for the
ABT AS7 and ABT Touareg 3.0 TDI.

2 Responses to ABT Touareg 3.0 TDI with power upgrade