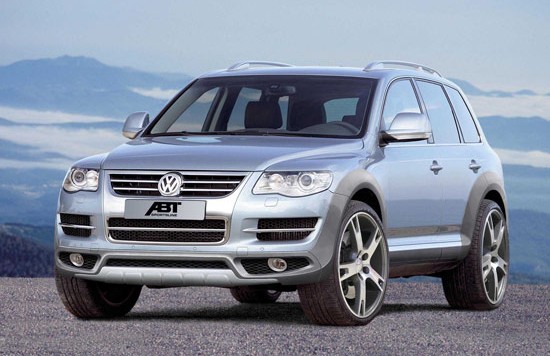 Abt Touareg – facelift for the heavy weight from Kempten

2002, the Touareg marked Volkswagen’s powerful way into the field of SUVs. “Even for Abt, the car was absolutely new territory,“ explains Hans-Jürgen Abt. Back then, the managing director of Abt Sportsline did in fact have doubts about the market opportunities of the heavy weight: “But the SUV has become a great success, and meanwhile Touareg and Audi Q7 are among our success stories.”

Of course, one reason for this is the fact that the Allgäu-based tuners particularly stress the “S” in “SUV”. Abt has made the optically clearly improved version of the SUV from Wolfsburg also very sporty: at the moment, three diesel engines are available, and all of them come with a power increase. That is particularly obvious with the popular 3.0 TDI, which, in this version, delivers 270hp (199kW) instead of the serial 225hp (165kW) and 550Nm torque. The segment of elegant SUVs starts with the 2.5 TDI, which thanks to Abt delivers 195hp (serial version: 174hp) or 143kW (serial version: 128kW).

The jewel is once more the Abt Touareg VS10, the ten-cylinder turbo diesel, which gains its enormous power of 360hp (265kW) from a five-litre engine. This engine perfectly harmonizes with the Abt Touareg. The V8, too, with its capacity of 4.2 litres is perfect for the powerful appearance of the SUV made in Kempten: instead of the serial 350hp (257kW), mighty 500hp (368kW) give the Abt VS8-R impressive drive.

The Abt Suspension, which is tailor made for the requirements of this extraordinary vehicle, guarantees that the enormous power potential of the Abt Touareg can be handled while driving. The comfortable air suspension with the innovative Abt Level Control (ALC) is also available for this version. Even in risky situations the Abt brake system bites with a firm grip and brings the car of 2.4 tons to a standstill. 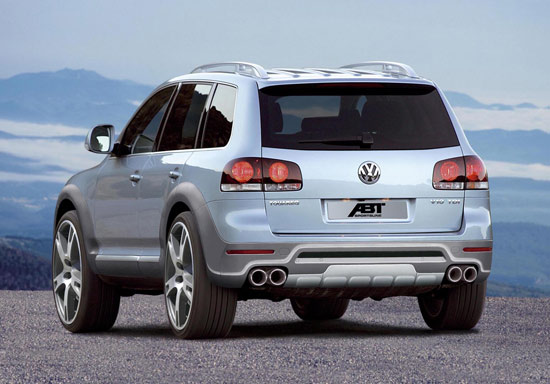 Again, the Kempten-based tuners have designed an extravagant body kit for the SUV, just as they did for the first Touareg version: a front spoiler lip, side skirts, fender extensions, a rear wing, rear skirts and the 4-pipe exhaust system typical for Abt form a design unit, which makes the car look extremely dynamic from every angle.

The Abt Touareg is far lower and broader than its serial twin, and that suits him perfectly. Even when the car is standing, you know that it feels at home on every terrain and that it will be able to deal with all challenges. Just right: the Abt AR-wheel with 19, 20 or 22 inches. The Abt Touareg is a power pack, an athlete in a tailor made suit; with this car, you are always adequately represented.