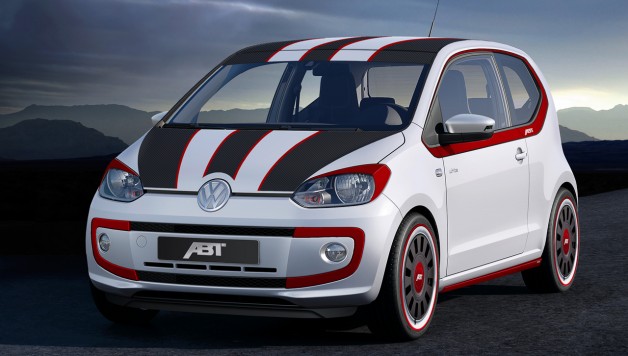 It is 3.54 meters short, but provides much space, is extremely fuel-efficient and very, very likeable: the VW up! No compromises here, and it is perfectly geared to what people in our modern age want. “Which does also mean that this baby is supposed to be fun as well“, says Hans-Jürgen Abt. ABT Sportsline’s managing director is simply in love with this car. “It is huge fun to drive it through the narrow streets here in downtown Kempten!“ The up! also reminds Abt of the swift little Abarths his father used to drive. And since his father was so successful in motorsports, the designers gave this practical new compact car a very sporty and aggressive outfit. It goes without saying that the up! is a real ABT, which means that it is assertive without losing its ecological and economic qualities. All components are of the highest quality and very stylish, of course, but also very affordable.

The little one is speedy, precise and will fight for parking space without remorse, but who would mind? His smile comes naturally, the bright red headlight masks make it appear stronger and smarter. Seen from the front, the ABT up! says: “Here I am, that’s me. Size doesn’t matter!“ The carbon-look deco set with its red stripes across the entire surface is a mix of retro and modern age. ABT draws upon the extravagant designs of the Swinging Sixties with which the power versions of plain mass-consumption cars – from “Herbie” the Beetle to Gordini and Cooper – showed that being sensible can also be cool. 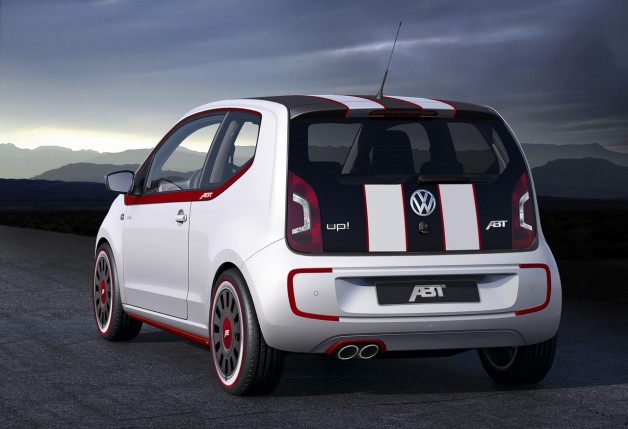 Window frames and side skirts are the “common thread” leading straight to the strong back of the ABT up!, where rear masks, an exhaust pipe tunnel and the sporty double exhaust pipe form a unit. The ABT up! will be much admired when thanks to new suspension springs it takes bends in a much more sporty fashion now. It is the love for details that forms its bond with its “elder” brothers. Mirror caps or red hub covers bearing the ABT-Logo make the up! stand out. No wonder, since this car wants to get “up” there.