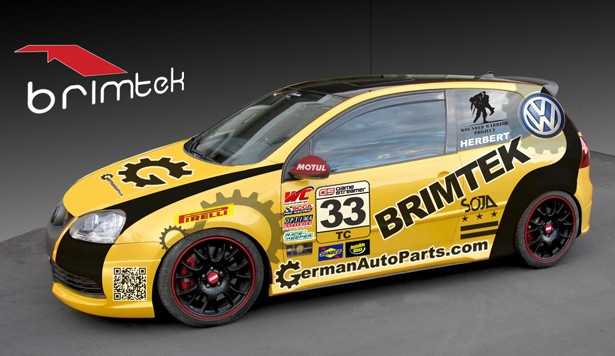 Virginia based Brimtek Motorsports, has teamed up with German Auto Parts.com and announced today its participation in World Challenge Sports Car Club of America (SCCA) Pro Racing series for 2011. The team will field one Volkswagen GTI in the Touring Car (TC) class.

“Brimtek is committed to the entire season and all of the races on the calendar,” stated Dave Tilton, Brimtek’s Team Principle. “Our team is composed of a very competitive and talented battery of individuals. We have worked unremittingly over these past few years to advance from club racers to a credible professional organization. Now we are ready to pit our proficiency, competitiveness and commitment against the best World Challenge has to offer,” added Tilton.

The driving duties will be handled by Reston, Virginia native, Tristan Herbert. Tristan is a natural competitor in everything that he does, ranging from professional snowboarding (member of the Budweiser Ariel Assault Team from 1998 to 2000) to racing cars. He began his track career in 1999 racing motorcycles and moved to cars in 2008. In the past three years of SCCA club racing Tristan has amassed 18 wins, 2 track records and the ITB championship in the Mid-Atlantic Road Racing Series. “I am a very competitive and focused guy, and I like to win,” remarked Herbert. “The opportunity to drive professionally is of course incredible, but the most important aspect for me is the competitive DNA that embodies the Brimtek team. They are ‘a play for keeps, never quit organization’ and that suits me perfectly. I feel confident that our commitment to each other and our race craft will catch a few of the existing World Challenge teams off guard this season,” said Herbert.

Brimtek has assembled a highly diverse and qualified team drawn from the ranks of retired Special Forces, technical research institutions and the professional motorsports community. “We have the comfort of devoting all of our resources to the art of racing,” said Tilton.

The GTI has been undergoing extensive testing this winter at Brimtek’s home track, Summit Point Motorsports Park. The new Stop Tech brake package and Pirelli tires are available for the 2011 season and will be extensively tested and evaluated. The team has also made a series of suspension modifications and upgrades as well. “Testing during the winter months on a cold track is not ideal, but we are nevertheless learning a great deal and adapting to different track conditions,” remarked Ray Kopp, Brimtek’s Technical Director. “We will continuously add to our knowledge base as testing proceeds throughout the winter months and into the spring.” When the St. Petersburg race arrives we will be ready to race.

The team office and shop is located in Ashburn, VA which is in close proximity to Dulles International Airport. The team occupies 3,000 square feet of space supporting fabrication, assembly and preparation of the Brimtek’s World Challenge GTI. Trackside support will be provided by the team’s 40 foot, three car transporter.