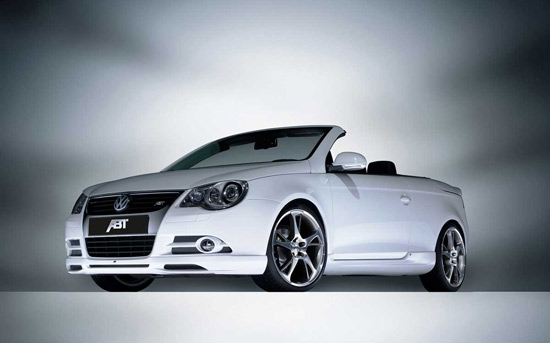 The ABT Eos and ABT TT-Roadster show just what the renowned vehicle tuner from Allgäu understands by a real open-top sports car: The company from Kempten developed components for both the Volkswagen Cabrio as well as the open-top version of the successful VW model, which emphasise the character of the respective cars and make them come across more striking from any angle.

The lowered front spoiler, the side skirts as well as the rear apron insert with the typical 4-pipe rear muffler underline the sporty ambitions of the cool ABT Eos and give it a confident appearance. And even more so with the BR alloys, which when standing even signalise a need for speed. The fact that this wheel also perfectly fits the TT-Roadster is understandable, as this breathtaking vehicle looks dynamic even without the body kit from ABT.

The company from Kempten converts the open-top TT into a real athlete which when motionless looks like a 100 metre sprinter waiting for the gun: the spoiler, the side components, the rear apron unit and the rear wing form one all-round successful unit. With it the sports car cuts an exceedingly good figure, not just on highways and motorways but also on the boulevard.

Regardless of whether it’s open or closed, a real ABT does not just look fast, it is fast too. The diverse ABT POWER packages provide this on the Eos and TT-Roadster, which really satisfy any performance hunger: On the 2.0 TFSI the standard series 200HP (147kW) is raised to 240HP (177kW) with ABT POWER. With ABT POWER S there is even 270HP (199kW) or a remarkable 300HP (221kW) available.

ABT offers the sportiest version for the six-cylinder with 3.2 cubic capacity: here ABT POWER R stands for the optimisation of engine management and compressor refitting with a liquid charge-air intercooler. In figures this means a proud performance boost of 120HP (88kW). A substantial 370 horsepower (272kW) is available with ABT POWER R. The 2.0 litre diesel engine in the Eos is also sportier: the standard series 140HP (103kw) is increased to a powerful 170 diesel horsepower (125kW).

ABT Sportsline has of course also got suspension components and brakes in its product range which are perfectly suited to the fast Cabrios. With them the ABT Eos and ABT TT-Roadster can cope with any situation and offer pure driving enjoyment. It is precisely these positive characteristics that the new ABT AS5 Cabrio will also have – and thereby continue the success story of open-top sports cars from the Allgäu… More on that soon.