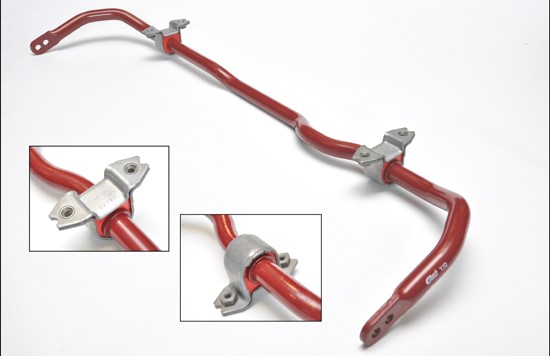 The bar, which fits a huge amount of other VW Group vehicles, including the Touran, Passat, CC, Seat Leon, Skoda Octavia and Audi A3, to name but a few, has always been a fast-moving line for the firm, but VW’s tortuous routing of the OEM part has always required a lot of work and ingenuity on the part of the fitter. Removing the subframe to gain access to the necessary hardware was relatively straightforward, but then the factory brackets had to be cut or split and subsequently re-welded around the new bushes before it could all be re-fitted. Not only did this take fitment of the kit outside of the ‘enthusiast home-fit’ market, it also took a considerable amount of time!

Eibach’s blissfully simple solution has been the simple addition and pre-fitment of two brand-new OEM bush brackets. Now, it’s simply a case of unbolting the old part as a whole, and replacing it with a new one, saving up to two hours of labour and effort in the process and making the total price for the professional fitment of this part considerably cheaper.

Commenting on the launch of the new kit, Eibach UK general manager Greg Kirby said, ‘We’re particularly proud of this latest revision to this kit as it exemplifies how important our dealers and end-users are to our R&D process. It was only by constant dialogue with both that we learned that there was a huge desire to make this job quicker and easier with the pre-fitment of all hardware. Not only does it hugely reduce the labour element of the job, saving money for our end-users, but by using brand-new OEM parts, the whole upgrade has much greater integrity.’