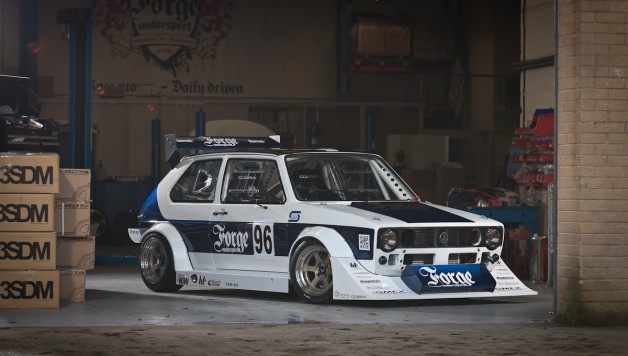 Gloucestershire-based Forge Motorsport is well known within the automotive industry for its enviable ability to create bespoke componentry. Lesser known is the firm’s equally impressive ‘Special Projects’ division, which used the 2013 Autosport show in the UK to unveil a stunning new creation – a £45,000 Mk 1 VW Golf. The firm will also use the show to announce its continued association with GRC ace and X-Games gold-medallist, Liam Doran, along with news of an exciting pairing between the two later in the year.

As the price tag suggests, this is no ordinary Golf. Based loosely on an unsuspecting 1981 model, the VW has literally been stripped to its very component parts before every single item on the car has been replaced or upgraded with competition-quality items to showcase Forge’s technical capability, as well as that of its carefully selected partners. 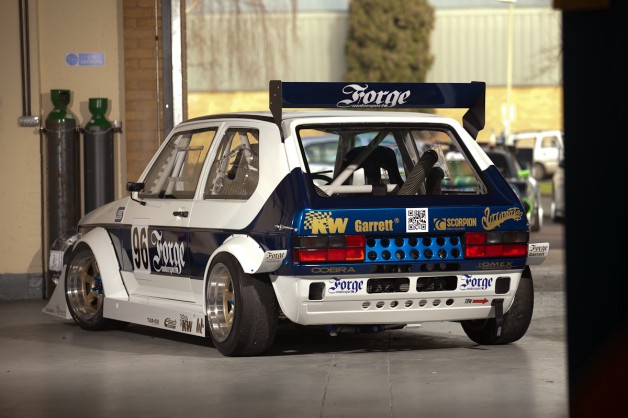 The shell was taken back to bare metal before Forge created a custom roll cage from T45 tubing that not only offers considerably more crash protection for any lucky driver, but also vastly improved rigidity. The engine is based around a honed and enlarged 1.8T block, but that’s where all similarities between the factory unit and the Forge creation end. Fully blue-printed and featuring balanced, forged internals and a plethora of tuning tricks and Omex ECU, the gorgeous-looking power plant is conservatively estimated to put out around 400 bhp. Not surprising really – the engine bill on this project alone is nudging £15,000! Quite a lot for a Mk1 Golf! The ‘charge’ is provided by the very latest Garrett GTX 2860R hooked up with Forge’s own 44mm wastegate, while Integrated Engineering provided the pistons, raw-finished intake manifold, 80-60mm Throttle Body Adapter Kit, Titanium Retainer Kit and all manner of other exotica including a 144 x 20mm con-rod set. ARP bolts and studs keep the whole lot together and Calico-coated bearings throughout should keep things spinning happily, even at the kind of crazy RPM and torque that this epic creation dish out when it’s on track.

The transmission has been similarly upgraded – a Quaife 34G 6-speed sequential FWD box with integrated Quaife differential. Custom-built with much shorter ratios for rapid track acceleration rather than top speed, it is more than up to the job of handling the mighty power from the blown, now 2.0 lump, especially once you factor in the reduced gear-change time thanks to the rapid-fire mechanism.

Suspension duties are taken care of via KW coilovers, along with what are bound to be very hard working Forge front and Tarox rear brakes. The inside is suitably business-like, with just the Cobra seats and Race Technology dash for company. But then with the music being supplied by the superbly sonorous powerplant, who needs a stereo anyway?

The stand-out feature of course is the bodywork. Complete with a period-perfect paint scheme and a set of Harvey Rice Engineering arches, the Forge Golf looks every inch the late-70s track refugee that the team originally envisaged – until you look a little closer, of course.

Now enjoying a third year together of technical partnership together, Forge will also use the show to announce that Liam Doran will be using the car later in the year at one of the UK Time Attack Championship rounds to prove its track prowess. Competing as a ‘One-Hit-Wonder’ in the MSA-accredited championship, the talented driver will doubtless be able to get the very best from every one of those 400 horses along the way. 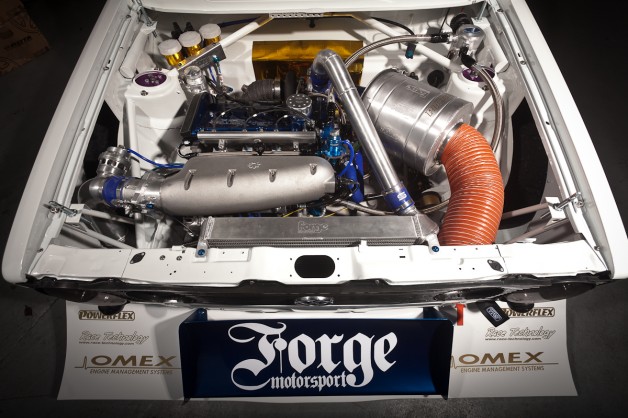 Commenting on the launch, Forge General Manager Peter Miles said, ‘I’m hugely proud of what our team has achieved with this car and I’m extremely grateful to all the companies and partners that have assisted us along the way. We’re very proud to be a British manufacturer, and with so much skill and expertise in-house, it made a great deal of sense to us to be able to showcase the talents of our team and create something that will really resonate with our key VW-Group audience. All of the team are huge fans of the ‘Berg’ look, so it seemed like the perfect excuse to build something in that genre and involve many other great brands along the way.’

But what about the Doran connection? How competitive is the car expected to be in the high-horsepower world of Time Attack? ‘We’re extremely grateful to Liam for offering to come and compete in the car for us,’ continued Miles. ‘The dates have yet to be confirmed, pending the rest of Liam’s global commitments, but once they’re all in the diary, we’ll be able to announce which round we will be competing at. With no chance to really test or benchmark the car, we’re not looking to turn the Time Attack world upside down, but I think VW and Retro fans will really appreciate seeing this car compete at full tilt – and if Liam’s on his usual sideways form, it should make for an impressive display!’

For more information on Forge Motorsport, please click to www.forgemotorsport.co.uk 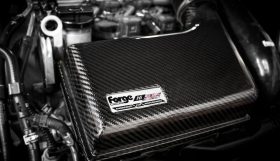