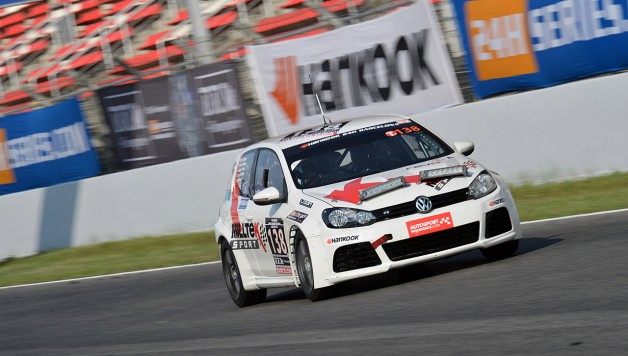 Highs and Lows for Milltek Sport In The 24h Barcelona

In true racing tradition Milltek’s motorsport division endured and enjoyed a race of mixed fortunes at the 24h Barcelona last weekend. The firm’s latest Golf racecar impressively limped through to finish after a tortuous 24 hours marred by damage and component failure, although Milltek’s ambassador Tom Onslow-Cole would redress the balance with an overall podium finish for him and his Ram Racing team-mates, allowing them to take the GT3 crown in the process.

Continuing its successful technical partnership with KPM Racing, Milltek had chosen Barcelona to unveil the latest changes to their Golf racecar. The good news was, switching to petrol power and an AWD drivetrain meant that the team really had a chance of scaring some of the bigger teams. The bad news was, attempting such a complex swap so close to the race left little time for pre-event testing.

Undeterred, the team steamed into free practise and qualifying with a set of times that belied the driver’s lack of seat time with the new set-up. Immediately up to the pace of the front-running Leon Cup cars, more than a few competitor teams looked worried by the early pace of the KPM-prepped machine.

Sadly, the elation wasn’t to last as Dale Lomas was clipped by a fast-flying prototype during a qualifying session, causing significant body and chassis damage, shifting the entire subframe and severing key drive belts and wiring looms. The result of this damage would be a lengthy trip to the pits for swift corrective surgery – and a critically curtailed session that prevented the rest of the drivers – Lucas Orrock, Tom Wilson, George White and Aaron Mason – from getting fully acquainted with the car.

After a simply miraculous repair job from the hard-working KPM techs, the team was soon back out, looking racy in the opening laps of the race and quickly bedding in to notch up a stack of well-paced laps. This was not to last sadly, as the cruel hand of fate once more dealt a blow, with the gearbox checking out of its duties somewhere around the 4-hour mark. Cue yet more rapid spannering in the Milltek pits – and a loss of some three-and-a-half hours as the team removed and replaced the entire drivetrain!

This was to drop the team from its solid 30th position to dead last, but relishing the challenge, the team picked itself up and was soon blasting through the pack once again to get into the low ‘50s’… right up until the point where the turbo felt it would like to join the original gearbox back in the workshop – and let go in spectacular fashion. Naturally, this meant another slow trip back to the pits and another battle from the back.

After a hard-fought 24 hours the team were ecstatic just to finish. But, when the dust had cleared, it was clear that the many hours of blood, sweat and tears had not been in vain. Netting 12th in class and 57th overall may not have been the result the team went to get, but simply to finish at all was a huge relief for everyone – and a fitting testament to the integrity of KPM’s prep work.

As previously mentioned, finishing 3rd overall, 3rd in class, but most importantly, at the top of the Championship sheets, Milltek’s test-driver and ambassador, Tom Onslow-Cole proved why he is in such demand on the GT circuit. As a wonderful lift to the team after a testing weekend, it was the perfect way to leave Barcelona on a high.

Commenting on the weekend’s activities, a surprisingly upbeat Steve Pound, Milltek UK’s managing director, was most philosophical about the results. “All in all, I’m pretty pleased with the outcome of the weekend, I feel I need to tip my hat to our drivers, and the KPM team in particular for giving 110% for every second of the race. The nature of endurance racing is that you never know what’s going to happen from an accident or component point of view, and that’s compounded whenever you try to launch an all-new spec ‘on event’ like this. What we can take away from it is that we have a robust and competitive package here that we have the winter to perfect before Dubai. Naturally, we’re simply delighted to see TOC do so well in the event too, and it proves that his talent transfers into any arena that he chooses to compete in. It’s one of the many reasons we have him in our R&D team!”

For more information on Milltek Sport and its motorsport programme, please click to www.millteksport.com