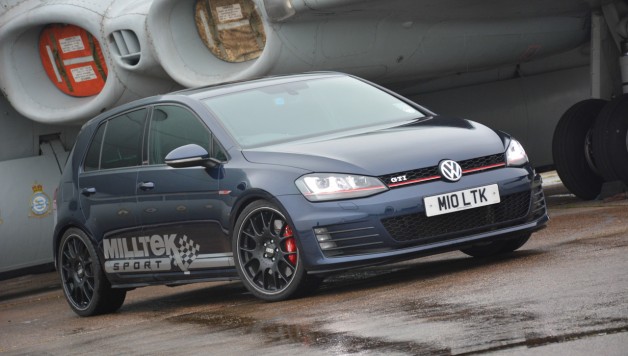 If the Golf GTI is the benchmark by which other hot hatches are judged, then surely, the latest Mk7 incarnation must be the ultimate expression of the art form? While many would argue that to be the case, extraction expert Milltek reckons that it’s merely the starting point for some serious improvement – and here’s the proof that they might just be right. 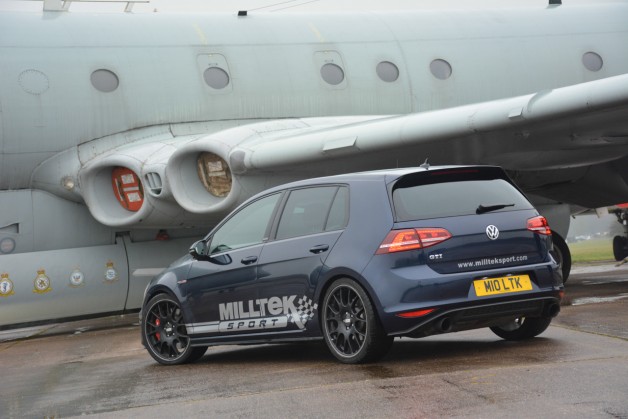 When your bread and butter is providing some of the nicest – and most effective – exhaust systems in the aftermarket, it goes without saying that you need to represent your wares on your company demo cars. Indeed, a saunter around the car park at Milltek’s factory in Ilkeston or its Technical Centre in Derby reveals a plethora of staff and development vehicles thus equipped. Look further however, and you’ll realise that many of them also sport a number of other enlightening mods too, allowing Milltek’s glittering showcase of technical partners to come along for the ride. After all, when you’re striving to be at the top of your game, it makes an awful lot of sense to partner with other brands and manufacturers trying to do the same. The shared knowledge that ensues, along with the rapid advance of technology that it breeds, invariably produces a better result than each company working in isolation. A classic example of when the net result of tuning is much greater than the sum of its component parts. 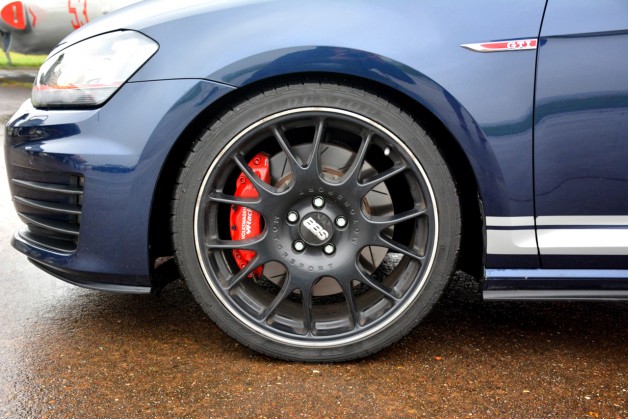 To Milltek managing director, Steve Pound, the philosophy is an extremely straightforward one “It’s simple really,” he explains. “We know that our end-users are unlikely to fit an exhaust in isolation, and that it’s usually part of a bigger package of improvements. Wherever possible we try to spec our demo cars to reflect a typical set of mods that each group of enthusiasts would consider. Only then can we double check that it integrates into a holistic tuning package.” 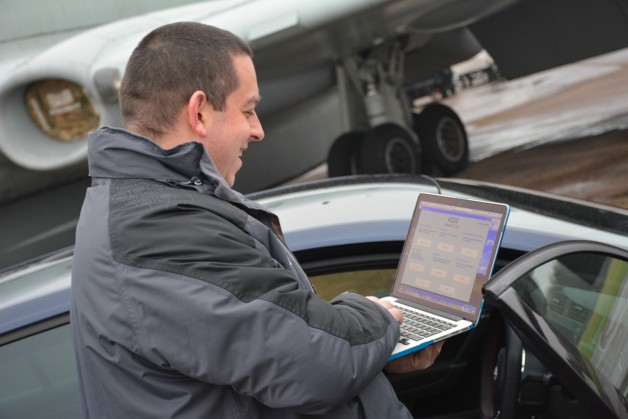 All very wise and sensible, but how do other tuning components, like say chassis parts, affect the exhaust design? “We learned a long time ago from our OEM work, that you can never be too comprehensive with your testing programme,” continues Steve. “Enhancements like ECU remaps must obviously be tested, as they may induce a resonance or NVH issue that wasn’t apparent on a stock vehicle. But even suspension package add new factors into the mix. Stiffer suspension may need we need to re-design the mounts, or simply the fact that the car can then be driven faster between two points may affect what we can and can’t achieve with a system.” 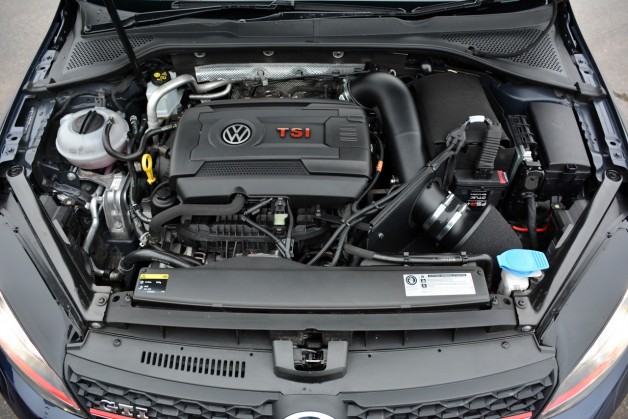 To prove this philosophy, Milltek sat down with a few of its serial ‘partners in crime’ to create a demo car that would allow each party to shine appropriately. As the VW Group element of its portfolio makes up a significant amount of Milltek’s business, choosing something from that stable was an elementary decision, but as for which car, that was a little harder. “With so much chassis sharing across the VW Group range, it’s easy to pick almost any of the cars, and be able to develop at least a healthy percentage of a system design that can be transferred to other models,” Steve continues. “But ultimately, when we had the chance to get one of the very first Mk7 GTis, it was a very easy decision to make. It’s always going to be such an iconic car in the VW range, that it made the perfect ‘poster boy’ for what we were trying to achieve.” 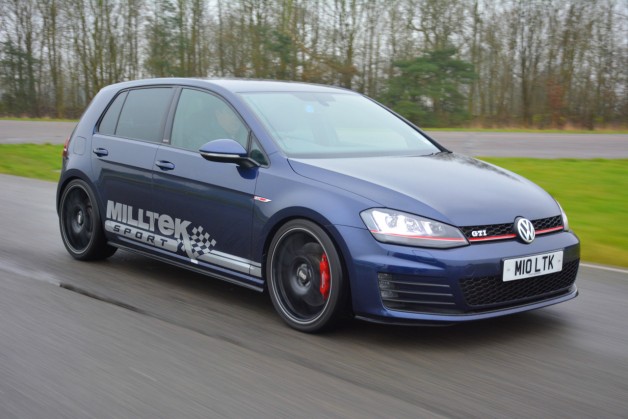 Upon taking delivery of the pristine 5 door, work began almost immediately, with Steve only enjoying a handful of evenings of driving the car in stock trim, before the serious work of exhaust design could begin. “Although we can never wait to get started on a new design,” he explains, “it’s always imperative to log how the cars work and sound in OE spec. All Milltek designs need to keep the refinement and usability of the factory system, only with greater sound and performance, so in that first week, we spent a lot of time driving and recording noise and resonance levels in order to give us a benchmark to measure the new system against.” 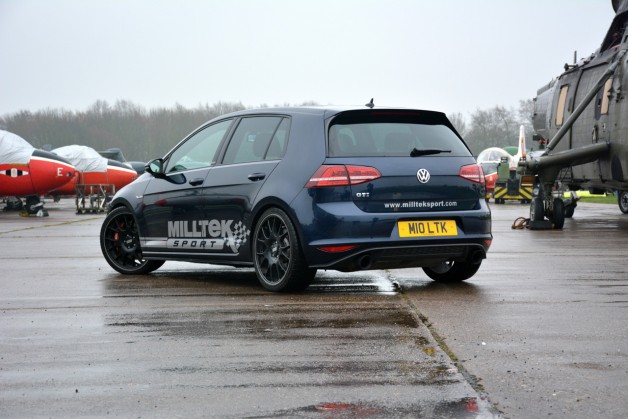 Although Milltek offer a vast array of catalysed and non-catalysed options for the Mk7 GTI, naturally, for its own demo car, things would be turned up to ‘11’. Based around the firm’s own 3” turbo-back system, complete with smart ‘Cerakote’ tail trims, there an awful lot less restriction and weight than the factory system that went before it had. Milltek always recommends that a system of this magnitude is always paired with a quality aftermarket ECU upgrade and improved induction set-up in order to extract the maximum performance and so, true to its word, left the car with its technical partners at Shark Performance for a few weeks. The induction side of things was ably taken care of by a smart crackle-black, mandrel-formed intake system from BTCC stalwarts, Pipercross. Complete with an impressively large cone filter and vastly bigger intake pipework than the original part, it’s clear to see how this component allows more air into the car as part of the tuning process. Now blessed with a better breathing car, the team at Shark were able to really extract some extra juice from the turbocharged lump. The fitment of a DTUK Hybrid tuning box and a diligent mapping and dyno session, or ten, has seen a huge increase in power and torque from the factory’s 235PS / 350nM up to a staggering 316PS / 450nM! This was now a package fit for tuning! 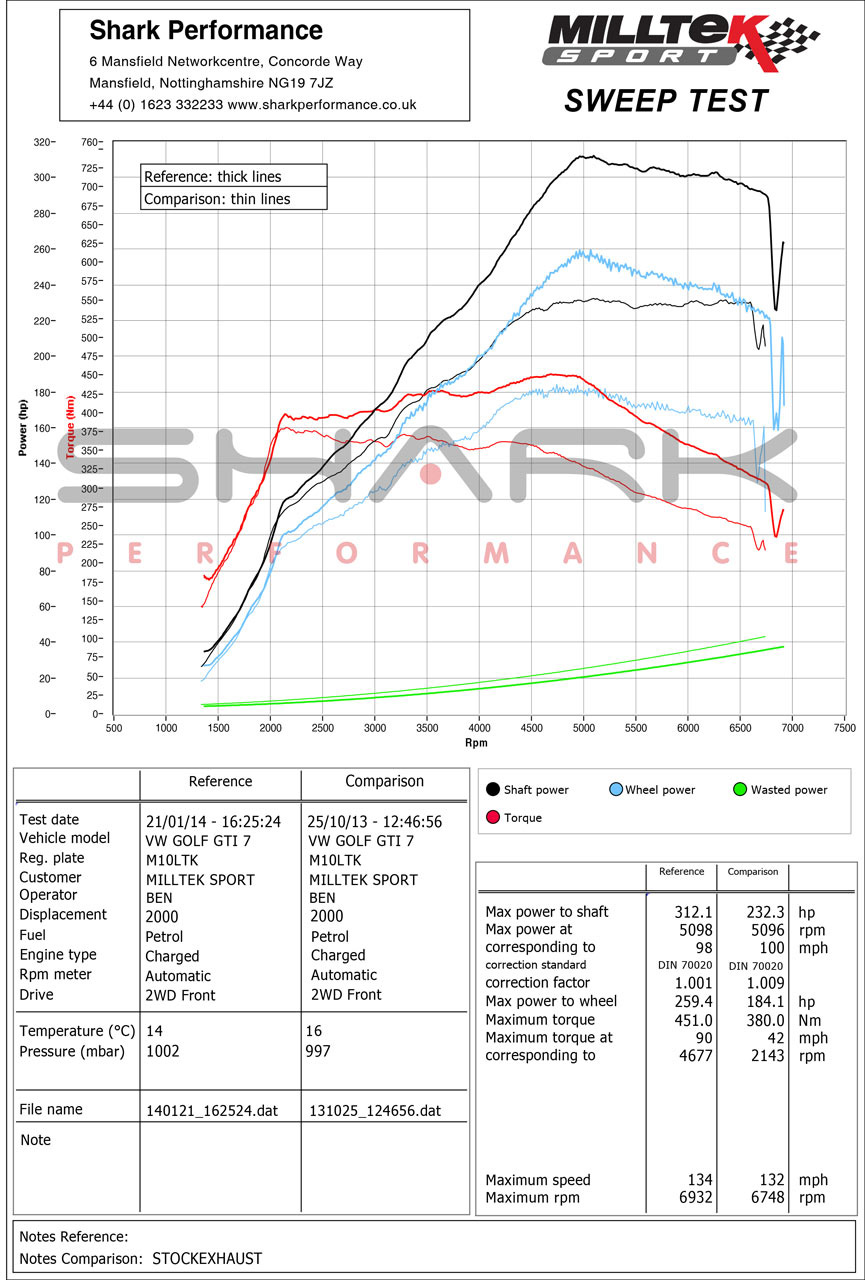 Suffice to say, handling such a huge increase was a big ask from the factory running gear, so sensibly, Milltek has turned to its good friends at German suspension gods, Eibach, and fitted the Mk7 with a useful combination of Pro-Kit springs and uprated, adjustable Anti-Roll bars to give the car as much ability in the turns as it now has on the straights. The springs offer a healthy decrease in ride height, which is usefully augmented by a corresponding lowering of the car’s centre of gravity. With a progressive wind, the springs ride quality at lower speeds and during motorway driving aren’t a million miles away from the factory’s idea of comfort, but throw the Golf hard into a turn, and the stiffer section comes into play, keeping the GTi much flatter in the corner, reducing load transfer and allowing the inside front wheel to really find purchase. The anti-roll bars only seek to enhance this ability further, giving the VW incredible cornering prowess, but without having to resort to a spine-crushing ride. 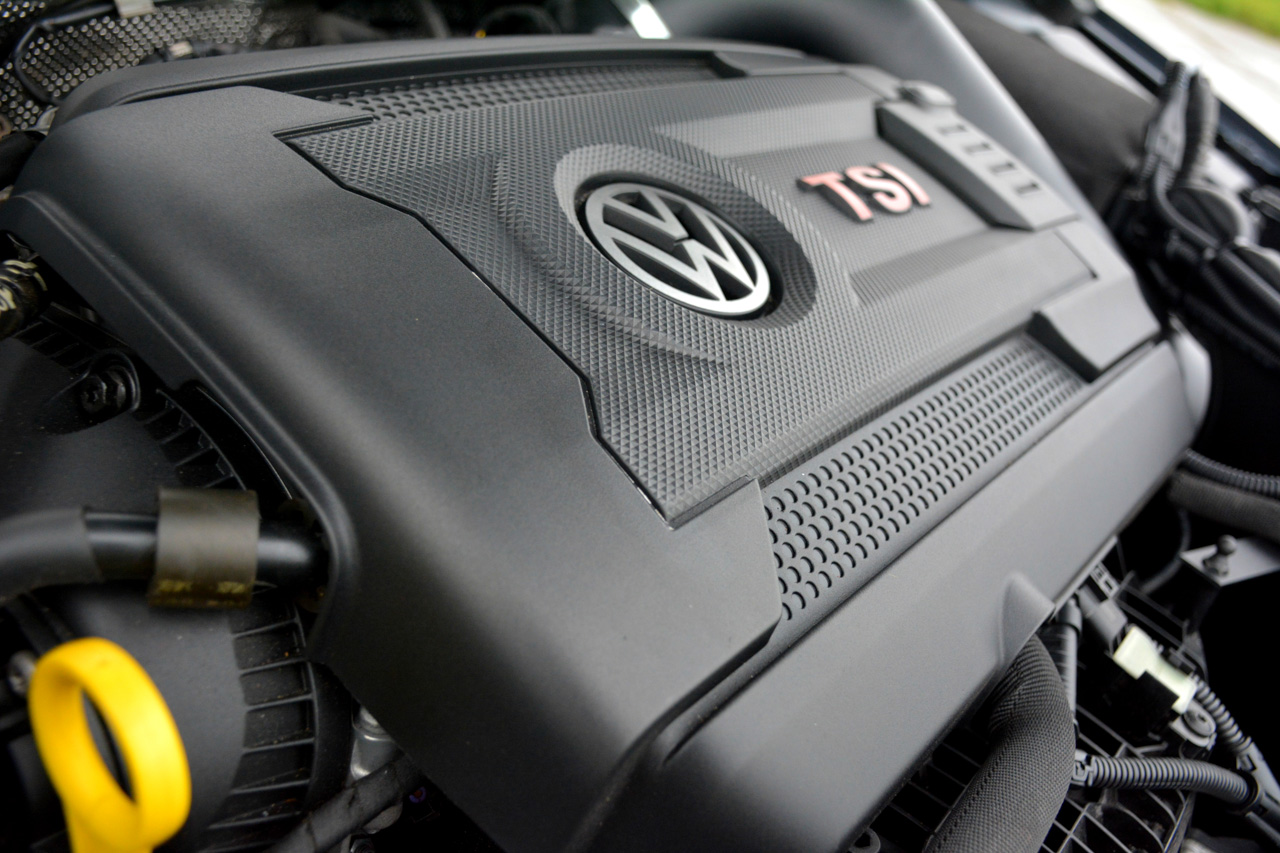 Able to accelerate and turn at speeds that are most un-Wolfsburg-like, Milltek’s technical team worked further into the car’s chassis to ensure that each element of the tuning programme would be an equal and opposite match for the other improvements made. The ‘belts and braces’ addition to this impressive party package of power and precision are a brace of 6-pot VW Racing 352mm brakes that are more than enough ‘Ying’ for the engine’s now considerable ‘Yang’.
Traction comes via 235/35/19 Dunlop Sportmaxx rubber wrapped around a set of attractive – and lightweight – BBS rims. It’s easy to ruin a fleet-of-foot car with the attractive – but dynamically inferior – fitment of a huge set of wheels. Although always easy on the eye, their increased mass rarely improves a car’s road manners, but with these BBS wheels, you seemingly get the best of both worlds – with an aesthetically pleasing large diameter rim juxtaposed with a surprisingly small mass. The result is a car that sits with an aggressive stance yet handles with the feel and feedback of a smaller-wheeled car. A great compromise. 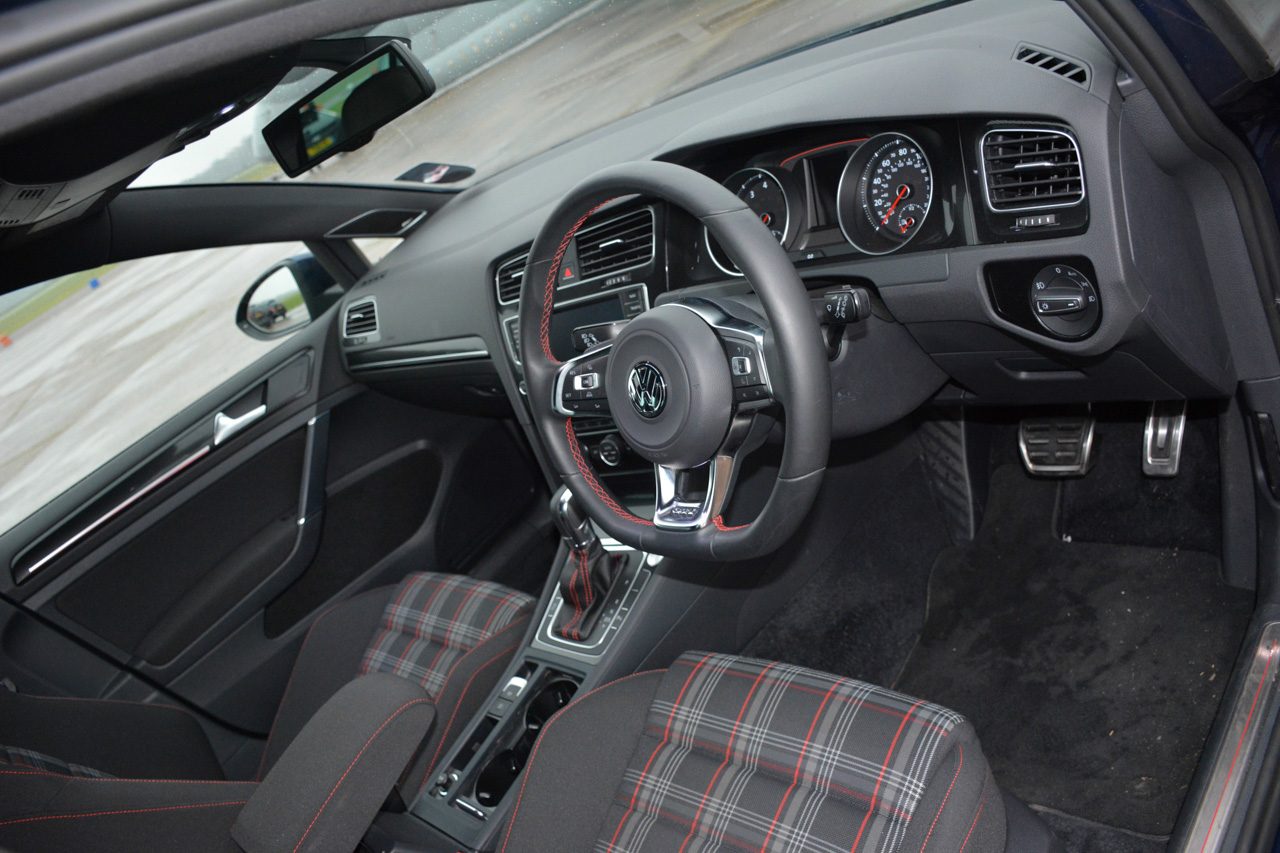 The result of this hard work is a car that hangs together exceptionally well and works as a complete whole. Power delivery is instant and addictive, giving the Golf an impressive sense of urgency, causing you to click the next gear on the DSG paddle before you can blink, with the revs rising rapidly and smoothly thanks to a superb throttle map. Despite the new power, the Golf still retains its benign and easy character, with only the sonorous rasp of the Milltek system – and the figures shown on the speedo, to remind you how much work has been done. It’s a hugely impressive package that keeps everything that made the original car brilliant, but with a far more visceral and involving persona, much more reminiscent of a smaller Mk1 or Mk2. And, as compliments go, they don’t get much better than that! On a wet track at Bruntingthorpe, it’s fair to say that I didn’t really get to even scratch the surface of what this superb little car can do, but what was surprising, given the filthy conditions, was that the car behaved impeccably, proving to be far more manageable on the water-logged surface than you might imagine such a torquey animal to be. Wheelspin was easily controlled and the grippy Dunlops did a superb job of shifting the biblical amounts of standing water around many of the corners. It’s a very easy car to steer on the throttle, but the overwhelming impression was of a bit of a pussycat really. The transition between its two ‘Jekyll and Hyde’ personas is a very fluid one, meaning you get plenty of notice before anything expensive – or painful – is going to happen. That said, I would really like to take it out on a dry track to really see what it can do. I’m fairly sure the resulting lap time would worry the owners of a few AWD powerhouses – and maybe even the odd sports car…
If you’re lucky enough to own a Mk7, each and every one of these upgrades is worthy of your consideration and modding budget. If you are lucky enough to be able to fit the lot in one go, then I promise you, hot-hatch nirvana awaits… 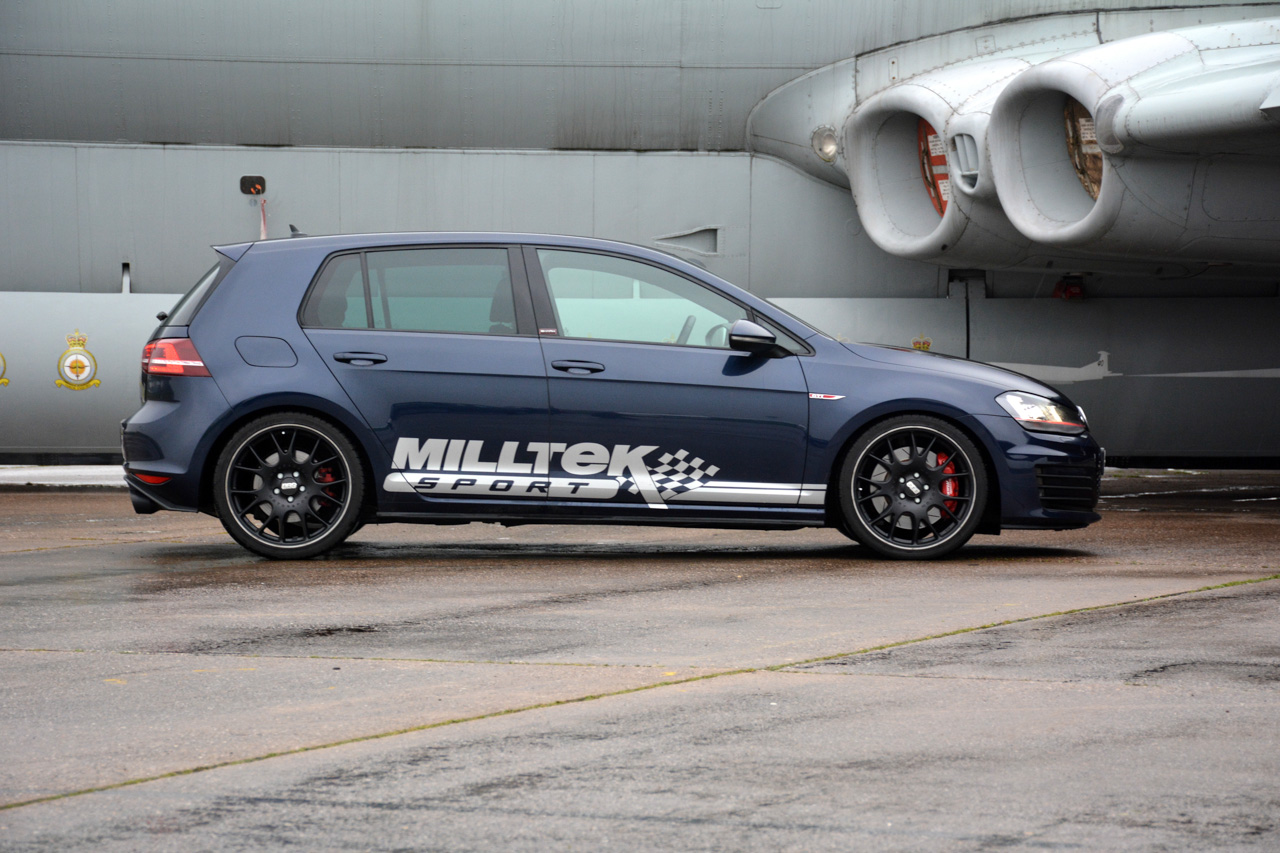