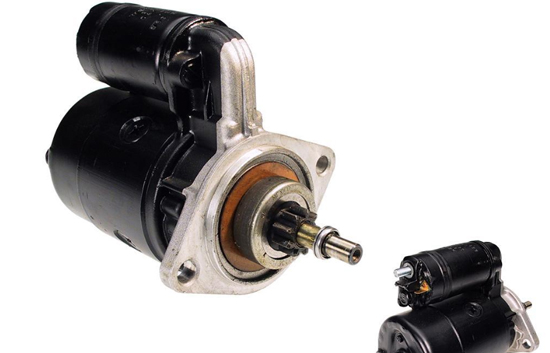 How to replace the starter motor on a 1967 Beetle

1967 Beetles are famed for being an idiosyncratic model, with plenty of new developments and unique parts for that year – something you certainly need to bear in mind if you’re sourcing a used starter motor. Once you’ve got it, though, fitting the replacement is a reasonably straightforward job.

The most obvious symptom of a failing starter motor is, unsurprisingly, that the car won’t start. Beyond that, you’ll probably hear a ‘click’ as the bendix – that’s the spindle that engages with the flywheel – moves, but the engine will struggle to turn over. (If the lights work, you know the battery’s not to blame.) Beloved by enthusiasts, 1967 Beetles have more than their fair share of unusual features. It can be tricky to find what you’re looking for with all those one-year parts. The good news is that it’s easy enough to pick up used starter motors from ebay or online breakers – just make sure you get the right one.

Finding the right used starter motor
1967 was a special year for the bug, but it gets a little more complicated than that. This was the first year that VW used 12v starters, at which point the company also switched to a larger flywheel and upped the number of teeth on them to 130 (6v models had a 109-tooth flywheel). So far so good. The catch is that the 1967 Beetle sits neatly astride that development, and might have either size of flywheel. Not only that, but some later ‘67 bugs had the larger flywheel but a special 6v starter motor. As a final complication, for various reasons you might want to convert your bug to a 12v starter motor. In some cases, this will mean grinding out a bit of metal from the bell housing – which actually isn’t a particularly difficult job, though it might be a bit more than you bargained for. In other cases, the larger flywheel means you can fit a 12v starter without worrying about clearance.

The bottom line is that when you’re picking up a used starter motor, make sure you take all of this into account – and don’t make any assumptions. If you’re in any doubt, order an exact replacement for the original starter motor. This will probably cost somewhere in the region of $110/£70. Or you can try sourcing a used starter motor which can be purchased for as little as $40/£25,

Fitting the starter motor
Assuming you have navigated these complexities successfully, all that remains is to fit the used starter motor.

Start by removing the battery cables (which should go without saying for any electrical job). You’ll find the starter motor on the right side of the engine. There are two bolts that hold it in place. One is pretty obvious. The second one also holds the engine to the gearbox. It’s a 17mm semicircular nut. Undo it with a suitable spanner, turning it away from you. Don’t worry, the engine won’t fall out. The bolt will slide out with the starter when you remove it. It’s a tough place to get to, and it can be tricky to loosen if it hasn’t been touched in a while.

Now, compare the used starter motor with the one you just removed – just to make sure they’re the same. Pay particular attention to the bendix. Once you’re satisfied your new one will fit, replacing it is just the same process in reverse. Reconnect the battery, turn the key, and (hopefully) listen to the engine starting without complaint.