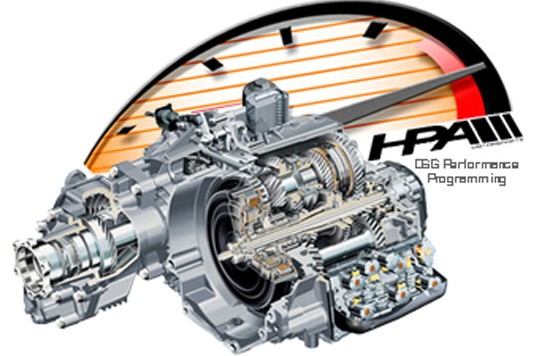 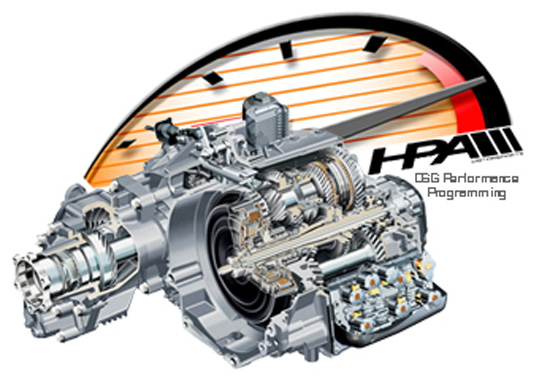 HPA Motorsports is proud to sponsor the new DSG and S-tronic Transmission Forum on VW Vortex, and would like to take this opportunity to officially introduce our new Direct Port DSG Performance Programming.

The DSG gearbox is an amazing bundle of technologies with over 50 patents protecting it. The mechanical and software details of this technology are on lockdown from even the dealerships who are not allowed to perform any service other than the basic maintenance.

Not to let this dissuade us, in 2004 HPA began a study to understand the overall mechanical limits of the DSG gearbox and compare it to those of the known manual gearbox. These efforts, along with our 15 year reputation in the field, gained us the attention of Volkswagen and earned us the right to exclusively build the three RGT project cars (Jetta, Passat, and Toaureg) for the debut at the 2005 SEMA show. All powered by a twin turbo and the Jetta and Passat outfitted with the DSG
HPA team met with the head software and mechanical developers for the DQ250, DQ350, and DQ500 DSG Gearboxes, and participated in ride and drives with the Audi A3 calibration team.

After more than three years of multiple overlapping and compounding durability evaluations together with our global partners (including the 24 hours at Nurenburgring, and numerous FT565 vehicle builds), our group has developed the software expertise necessary to ensure safe functionality of the DSG in extreme applications.

Unlike simple engine tuning which involves the use of one of many readily available programming interfaces to manipulate the spark and fuel of the engine map, tuning the DSG involves many more parameters and a secure understanding of how these react to various vehicle inputs.

Reading and writing software to an ECU is one thing, but without the experience and first hand knowledge of cause and effect generated by manipulating the blind variables of the DSG software, it is a potentially dangerous situation.

With over two dozen different DSG gearboxes in North America (and several more globally), no tuner is better versed and more prepared than HPA is to overcome these variables to ensure a perfect result that won’t prematurely wear out clutch packs or threaten the sensitive gearbox.

In early 2008, many tuners began offering big power upgrades for DSG equipped cars without consideration of augmenting this critical piece of hardware. HPA has worked since 2004 with an evolving understanding of the DSG system to develop cohesive power packages that deliver proven, durable, results. It was not until late 2008 that a feasible avenue to offer this DSG performance software to the general public was realized. At that time, HPA kicked off an aggressive initiative to clearly showcase the benefits and needs of DSG modification. Throughout our first two trips around the continent we further studied the idiosyncrasies of the various OEM DSG files and finalized our official offerings.

With an HPA tune, each file is created specifically for the car which it is being written to. This ensures that sensitive emissions and hardware interfaces are not jeopardized by an attempted one file fits all strategy.

DSG performance involves a synergetic relationship between shift call outs, engine load, driver demand, and mechanical execution. Within these relationships, a harmonic balance must be maintained to ensure the various integrated systems work together and do not overpower their basic limitations.

One of the keys to our success in tuning the DSG software comes from our command of the clutch pressures. We are the only company to offer a progressive shift response upgrade which, through a scaling effect, optimizes the DSG’s durability, and retains known comforts and mileage. Under tip throttle and highway usage, shift response is improved by approximately 1/3 faster than factory. Between 50% engine load and WOT, our software is scaled to shorten the shift response up to two thirds quicker than factory. This feature is in effect in D, S and M modes. Our scaling effect synchronizes the hand off between inner and outer clutch packs depending on the load and acceleration demand applied. This eliminates unnecessary clutch slippage under full load accelerations, which reduces clutch wear.

Note: any non progressive software will prematurely damage clutch packs as different engagement response windows are required in order to manage the variables of different situation and allow the mechanics within the gearbox to conclude their transitions.

Working in conjunction with our progressive shift configuration, we have increased the DSG Gearbox’s ability to transmit torque from 350nm up to 500nm while still ensuring the stability and capability of all the mechanical moving hardware within the DSG gearbox. With an HPA performance program, The DSG computer will no longer initiate steps to shed engine torque when the factory 350nm limit is reached which unleashes the true benefits of any engine modifications.

With HPA’s Stage 2 DSG Software, launch control is activated on any vehicle (ie Audi A3, Jetta/GLI) that did not come equipped with factory launch control.

A perfect launch out of the hole accompanied with a great 0-60 acceleration is one of the best ways to show off your performance mods. HPA’s DSG software upgrade enables the Launch Control feature on any car that did not come equipped with it from the factory. Furthermore, improving on the uneventful factory launch, we elevate the launch RPM to 4750; putting you in the sweet spot of your power band for a spectacular launch while maintaining a safe range of pressure that can be applied to the factory clutches to provide maximum grip without slip.

Putting you back in command of your engine’s power at the upper RPM range, we have raised the DSG transmission’s rev limit to 7150 RPM as this optimizes the FSI engine’s compressor map and maintains the safe operating range of the V6’s valve springs. Note: the DSG rev limiter will be overridden by your engine’s rev limiter, so this feature may not be utilized with factory (or some aftermarket) chips.

When commuting in traffic and looking for fuel economy, the brain behind the DSG is a mastermind at selecting which gear to be in. When it comes to spirited driving, the factory Sport mode can be quite aggressive, but many complain at how it overrules the driver’s input in situations like cornering.

With HPA’s performance programming, we have put the driver back in complete control.

In M mode; automatic up-shifting at wide open throttle has been deactivated, as has kick-down; allowing you to bounce of the newly redefined rev limiter and maintain your gear at will.

When you opt to take over the paddles in S mode, only at Wide Open Throttle will the software automatically shift at the newly defined red line. Up to 95% load, you will have the benefit of the removed up-shifting and kick-down to take control over your gear changes. This ensures less experienced drivers still get an automatic gear change under WOT demand.

In D mode, the factory up-shift and kick-down settings are maintained.

IN-DASH GEAR DISPLAY
When in D or S mode, the active gear is now displayed in the instrument cluster to the right of the PNRDS icons where it wasn’t previously (R32 etc)

Stage 3R: Extreme Performance: $1995
Stage 3 software is a must for all 400+ HP applications and those drivers who demand the most out of their chassis in D, S, or M mode. In addition to the upgrades offered in the Stage 2 package, Stage 3 includes the following benefits:

Stage 3 is a complete departure from the factory software, every gear interchange throughout every mode (D, S, and M) at every driving condition (tip, partial, or wide open throttle) is recalibrated to accommodate torque in excess of 600 ft lbs of torque.

Our programming revamps the clutch engagement curve and allows you to take advantage of the increased grip from performance clutches by scaling out the pressure calibration field. With more pressure on tap to clamp down the clutches, the additional TQ applied through High HP applications won’t strain your clutch packs.

The D mode up-shift program has been tailored to avoid sub 30 MPH 6 gear selections which, when combined with high HP and torque, will overload the sensitive input shafts of the gearbox.

Additionally, a manual override feature enables the driver to retain manual callout in D or S mode instead of reverting back to automatic after 8 seconds.
NOTE://OEM clutches have a durability threshold of 400 crank HP. With stage 3, we have been able to hold 500HP but the reliability of these packs can not be quantified. 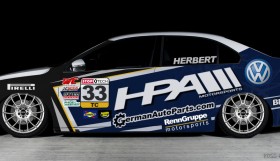 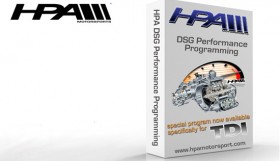 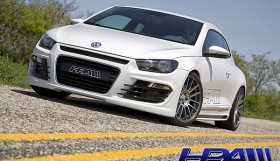 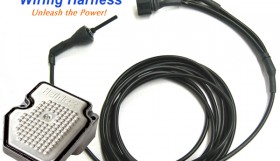