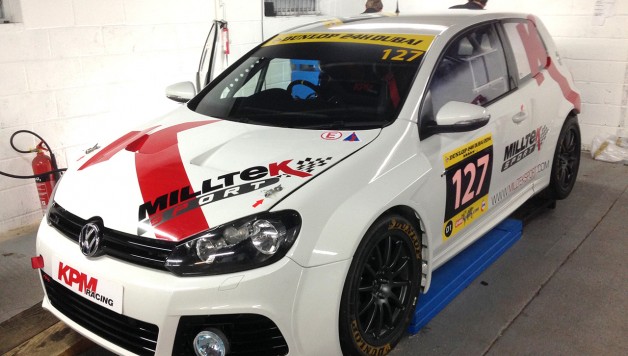 KPM Racing are putting the finishing touches to a high-powered Diesel version of Milltek’s Time Attack racing Golf which will compete in the 24H Special’s class of the Dubai 24H race 9-11th January 2014.

The diesel Golf not only wears the same body kit as Milltek’s Time Attack car but has a very similar set up in every other sense. For Dubai however, it will be powered by an uprated 2.0 TDI engine with a full Milltek Sport 3-inch race exhaust system (including a custom manifold to fit the larger Turbo Dynamics hybrid turbo).

For its début race in Dubai it has an exciting roster of drivers:

The 270bhp Milltek-backed Golf will go up against five other diesels in its class, including a trio of BMWs, and KPM boss, Kevin Poole, is hopeful of a strong result: “Anything can happen in endurance racing and the Golf is reliable and competitive, so we will be giving it everything to try to score a good finish. If things go well, we will look at using the Golf in the new international endurance series, which takes in races in Holland, Italy, Spain and Hungary. It’s very likely that the Golf will compete in the Volkswagen Racing Cup next year as part of a campaign to reclaim the championship title we won in 2012.”

“It’s a brand new build, essentially to VW Cup regulations but with the addition of a long-range fuel tank and the other essential endurance-racing equipment,” says Poole. “We’ve tested at Rockingham and Silverstone and over the course of 10 hours of running we encountered no real issues.”

All being well, the Golf will see a whole season of racing action in the 12H Zandvoort, 12H Italy, 24H Barcelona, and 12H Hungary.