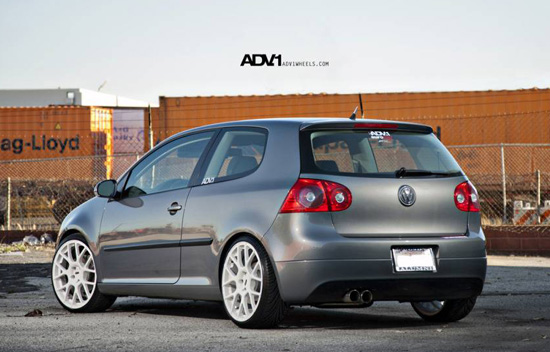 Volkswagen is one of the most famous automobile manufacturers in the world, and currently has three cars in the top 10 list of best sellers ever – the Passat, Golf and Beetle. With these three cars, Volkswagen tops the list of automobile companies that still have cars that are currently manufactured, taking its total car sales in 2011 to 8.16 million, a 14.3 per cent increase on the previous year.

The Mk5 Golf GTI, one of Volkswagen’s best-selling models, went on sale in October 2003 after being unveiled at the Frankfurt Motor Show the previous month. The car manufacturer aimed to make headway in North America where SEAT and Skoda were not marketed, revamping the branding and perception of the Golf Model. Not only was the car extremely well received, but the chassis and dynamics of the model caused rival manufacturers to up their game.

It’s rumoured that Volkswagen poached Ford’s best engineering team for the Mk5 VW Golf GTI, leading to the development of the multi-link control blade independent rear suspension system, now an industry benchmark for handling and ride. Take a look at some of the stand-out features of this superb car.

The Look
The new Mk5 Golf GTI has hit the nail on the head when it comes to looks, especially in a class where family design is notoriously difficult. Not only does the Mk5 model look focused and refreshed, but it’s got some serious bulk under the bonnet too. Looming in a rear view mirror, the Golf certainly distinguishes itself from the rest of the hatchbacks on the road.

With its dazzling 5-hole 17-inch alloy wheels and fashionable sports seats as standard, this model offers more for your money. No matter where you’re sitting in the car, the snug but spacious feel will keep you comfortable throughout your journey.

Under the Bonnet
Drivers who have had the chance to experience the turbo 20 valve, 1.8 litre engine in most Audi, SEAT and Skoda cars won’t be too impressed by the Golf GTI’s output. With 207lb of torque and 197bhp, the engine isn’t the forerunning rival to SEAT’s Leon Cupra.

Surprisingly however, the tuning and direct injection 2 litre FSI makes up for the Golf’s bland 1.8 turbo, offering a stimulating and pleasant surprise. Not only is the delivery of the turbo capped to produce linear torque, but the engine provides a responsive delivery to partner dynamic engineering.

The Ride
It’s surprising to drive a hatchback that feels as light as a sporty model and, combined with the supple suspension and stiff chassis, the Golf’s ride is in a class of its own. Although the steering can feel a little light at manoeuvring speeds (mainly because of the variable-rate assisted hydraulics), it certainly toughens up as you hit the bends.

When driving the Mk5 Golf GTI, you’ll feel in absolute control even in the roughest conditions. Taking corners in second gear is second nature for this model, and you won’t feel overburdened by the power underneath your foot. A top class machine, this hatchback won’t fail to impress.

This article was contributed by Lloyd, a freelance writer and blogger, who is currently working with SO Switch – experts in insurance comparison.