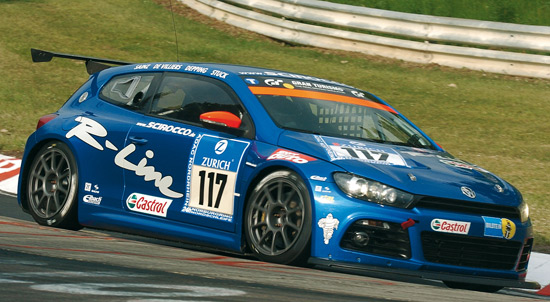 At the very start of its career, the new Scirocco made an immaculate debut in the legendary 24-hour race that took place from 24th to 25th May at the Nürburgring: truly one of the most gruelling races in the world for both man and machine.

At the first attempt, the race cars – fitted with Eibach Suspension Components – claimed a one-two finish in the SP3T class– for turbo cars in the 2-litre class. Scirocco no. 3 also made it over the finish line, taking fifth place in the class.

In the total field of 230 cars that started the race, the VWs took the 11th, 15th and 32nd places. Quite remarkable as many competitors were driving much more powerful “fireballs” into battle than the 325hp coupés named after the desert wind, and particularly as the cars had also just been resprung as part of a close-knit programme. But, with the perfectly-balanced VW concept including the Eibach Suspension Components, the rival competitors extra engine power failed to have the desired effect, demonstrating that sheer horse power isn’t everything.

Having professionals at the helm also made a significant contribution to the success. The two “class winners” were driven over the finish line by Jimmy Johansson, Florian Gruber, Thomas Mutsch and Hans-Joachim Stuck as well as Carlos Sainz, Giniel de Villiers and Dieter Depping.