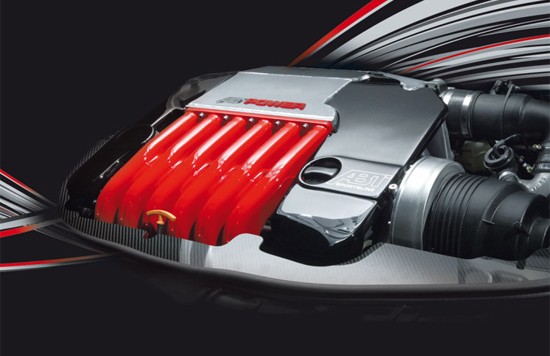 Regardless of whether it is a diesel or petrol car – ABT Sportsline, the largest tuner for cars of the VW group in the world, offers diverse performance improvements for almost all equipment. Do you just want a few more HP so that you are able to cope with everyday traffic with aplomb?

Then ABT POWER is the right choice for you. Here the electronic engine control unit is optimised and perfectly adjusted to suit the character of the car. This actually no longer has anything to do with chip tuning, as ABT POWER does not make any risky modifications to the hardware. Here “only” the software is modified. Nevertheless it is associated with an enormous amount of development work, as Christian Abt, the general manager of ABT responsible for technology, explains. The experienced motor-sport star states: “We have to re-program the data for each model and each engine and then test it on a ‘driving object’. Only once the performance improvements also perfectly agree in everyday traffic, are they available for the customer to order.” In order to simulate the stresses of a long car life, Christian Abt and his crew do not just drive thousands of kilometres on “normal” roads and test surfaces, but the engine is also put through its paces in the engine and rolling road dynamometer. “As a result the full guarantee does not just remain valid on new cars, but we can also provide guarantees for the performance improvements on ‘used cars’”.

Customers who want “even more” than ABT POWER, can, of course, also be certain that the car is not only made faster and more sporty, but remains completely reliable. Anyone who chooses ABT POWER S receives technology from ABT which has been tested up to the last detail – and with a guarantee. This is because alongside the engine control unit a new turbo charger “Made in Kempten” is also applied. All the components are highly-efficiently coordinated with each other and fit perfectly. The hardware and software are developed for a harmonic and sporty partnership and all “pull” together. Christian Abt encapsulates the credibility of ABT Sportsline: “our aim is to offer the customer the maximum amount of driving enjoyment and dynamics at one-hundred percent quality, i.e. everyday usability and durability of all the components.” In the case of ABT POWER R this leads to the creation of real super-sports cars: for example, on the 4.2 litre V8 Audi S5 the performance is increased by 45 percent to a massive 510 HP (375kW). This is possible due to the optimal combination of the modified engine control unit with an ABT Compressor.

However, ABT does not merely offer more power at the best quality: the company is also successful in research, when the aim is to combine driving enjoyment with environmental and economic benefits. The latest example is the 1.4 TSI from the Volkswagen group. With ABT Sportsline the “small” engine’s performance then becomes exactly the same as its big brother’s, the 2.0 TSI series model – with considerably lower petrol consumption and therefore also lower CO2 emissions.