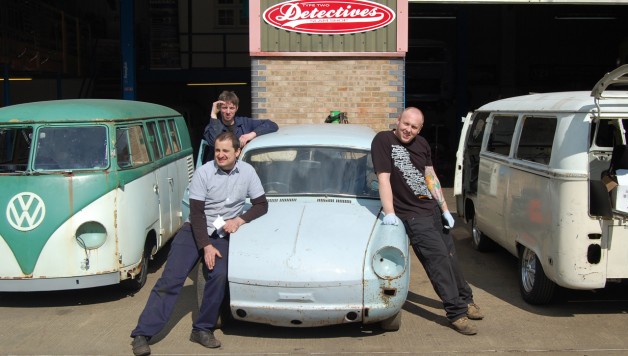 T2D, the Cambridge based VW scene legend, has announced today that it will be performing one of its famous live project car builds at the Bug Jam 26 event in July.

Held on the 20th-22nd July weekend at Santa Pod raceway in Northampton, Bug Jam packs in 35,000 of the world’s most ardent VW fans and looks set to provide the best show ever this year, with a superb line-up of artists, attractions, race and show cars. As one of the core features of the 2012 show, the T2D build will be a demonstration of live automotive theatre as the team battle to restore a tired and dilapidated Volkswagen to its former glory, adding their own unique brand of custom tricks along the way.

Having performed two perfectly executed build in previous years, on the VW buses that the team are perhaps best known for, this year’s build sees a definite return to the company’s roots, using a solid, but tatty Type 3 Variant, or ‘Squareback’, which T2D owner Paul Medhurst has acquired especially for the project. ‘It’s always nice to remember where you came from,’ he commented, ‘And Type 3s are how we began in this business. They’re a relatively rare car these days, so it will be great to be able to bring one up to show condition and demonstrate a few of our time-served tricks and improvements along the way. It’s a tough task to carry out so much work in just three days, but we should be able to provide a real spectacle for showgoers, and something that they can visit and revisit throughout the three days of the show that will change substantially over the course of the weekend.’

Although plans for the car have yet to be finalised, the T2D team has already lined up a great selection of suspension, engine, paint and trim modifications to go onto the car. It’s a herculean task, even with a full complement of technical talent. T2D would normally allocate several weeks to achieve this kind or result, but with the clock ticking and the crowds watching, the pressure will be on from the moment the gates open to get the car finished in time to close the show on Sunday with a run up the strip. As well as the capacity crowd that Bug Jam always attracts, the whole show will also be filmed for Motors TV and later internet release, allowing hardcore ‘dubbers the chance to relive the event again and again.