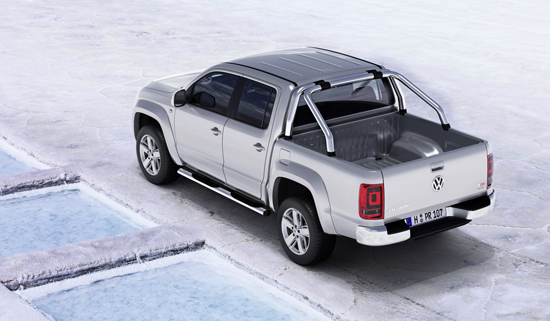 While there are a lot of models responsible for VW’s rising global sales, a compact pickup known as the Amarok has been a key contributor to VW’s growth. Worldwide sales have grown dramatically since the truck debuted in 2009, rising from a few thousand units in 2010 to 66,400 sold in 2011 to 84,100 sold in 2012.

The truck has been well-received by critics, continues to win awards for value and capability, and has maintained sales growth despite a terrible European economy. The Amarok is one of VW’s success stories.

Chickens? How are chickens keeping the Amarok out of the US?

By far the largest factor that has kept Volkswagen’s popular truck out of the US is likely the 1963 “chicken tax”, a 25% tariff imposed on the import of light trucks. Ironically, this tariff was originally aimed at Volkswagen and Germany.

Thus, if VW is going to sell the Amarok in the USA, they would need to begin producing the truck in North America (either Tenessee or Mexico, which is tariff-free as a result of the NAFTA agreement).

Fortunately for US consumers, VW’s sales goals, additional manufacturing capacity, and the size of the US compact truck market are three great reasons to believe VW will bring the Amarok to the USA.

• Although VW executives have been tight-lipped about the specific plans at the Chattanooga and Puebla plants (see map), billions have been allocated to expand both sites. This new production capacity means VW will have “room” to build the Amarok.

• VW’s stated sales goal of 800k units per year in the United States by 2018 is aggressive, especially when you consider they only sold about 440k cars in 2012.

• The additional 360k sales VW wants are going to have to come from new models (at least partially).

The Amarok is A Great Fit For The US MarketSetting sales goals aside, the Amarok makes a lot of sense for Volkswagen USA.

First, there is a gaping hole in the compact truck market, as none of the existing compact truck models are offered with a diesel engine. The Amarok’s 2.0L TDI would be the most fuel-efficient engine on the market.VW has a strong and loyal consumer base in the United States, and it’s safe to assume that a good portion of these VW fans have a need for a truck. VW can expect to sell a few thousand Amaroks a year just to dedicated VW fans.

Second, positive reviews of the Amarok overseas indicate the truck is a worthy competitor, and the US compact truck market is stagnant. Frankly, Toyota’s aging Tacoma (the best-selling compact truck in the US by a large margin) hasn’t had to sing for its supper for a long time.

Last but not least, it must be noted that the name Amarok is North American. The Inuit people (native to the arctic areas of Canada and Alaska) used the word “amarok” to describe a powerful giant wolf creature. That’s got to be another sign that VW’s truck is destined for the US market, right?

Author Jason Lancaster is a long-time VW fan who writes VW how-to’s, news, and articles about featured VW vehicles on the VWPartsVortex.com blog. Check it out.