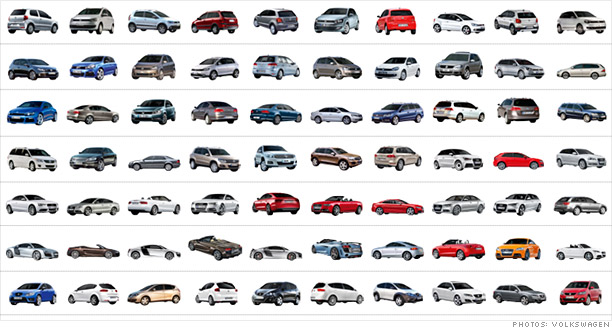 Top Volkswagens of All Time

What Volkswagen is known for around the world is the ability to incorporate all three elements of the perfect car into one: quality, speed and brilliant mechanics. Thus, it is deservingly found among the top three car brands in the world. Have you ever asked yourself what does Volkswagen mean? It stands for the true spirit of the cars signed by it- it means ‘people’s car’. The origins of Volkswagen go back to Adolf Hitler who while in prison in 1924 thought of producing a car that every person in Germany can afford. It was to carry two adults and three children and could reach the top speed of 100 km/h. Since then Volkswagen produced a great number of different automobiles to satisfy the people`s different tastes. With the sale of 1.2 million cars in the first quarter of 2011, it is expected that Volkswagen will become world`s number one car producer. The Volkswagen group contains of the following car brands: Bentley Motors Limited, Audi Ag, Bugatti Automobiles, SEAT, Skoda Auto, Automobile Lamborghini and Scania AB. Let us see the list of top Volkswagens of all time.

1. Volkswagen Beetle
Volkswagen Beetle is the first car ever produced and designed by Volkswagen. It is often referred to as the ‘type 1’ or simply the bug. It is Adolf Hitler himself who paid Ferdinand Porsche for the production of the ‘beetle’. The car started its production in 1938 and it lasted until 2003, thus breaking all records and becoming the most manufactured car worldwide. During the period of more than 60 years over 21 million examples were produced. The car was designed to be as simple as possible so that everyone could drive it. The original beetle served as inspiration for the production of Volkswagen New Beetle in 1997 and Volkswagen Beetle A5 introduced in 2011.

3. Volkswagen Passat
Volkswagen Passat is a luxurious family car produced since 1973. It is one of the most desired cars in the world since it is found in the middle between normal family cars and luxurious out-of-reach automobiles. It is produced in great number of versions each enhanced in comparison to its predecessor. The most recent model is the largest in the family, but its prize is smaller. The simplest version of the 2012 Passat has a 2.5 liter five cylinder engine which produced 170 horsepower. The enhanced version offers 3.6 liter V6 engine.

5.Lamborghini Aventandor LP 700-4
Lamborghini Aventandor contributes to the ‘intended’ Volkswagen Number 1 Car company status for sure. It will not be produced in massive numbers, only 4000 units. The enhanced version will offer up to 354 km/h, 690Nm of torque and maximum power of 700PS. The exact price is not still confirmed.

Volkswagen has offered us many other models except for the above mentioned ones. Let me know which one is your favorite and which one would you add to the list.