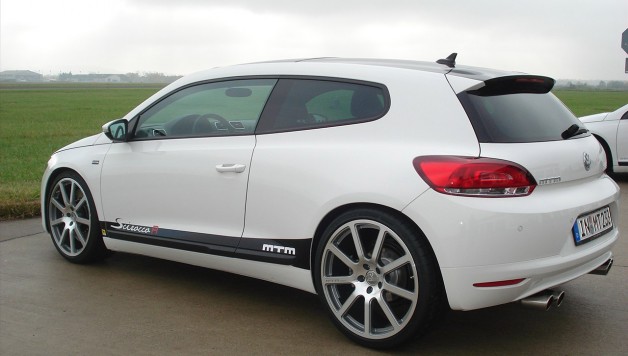 Just in time for the Essen Motor Show, the successful tuner mtm Motoren-Technik-Mayer introduces the MTM Scirocco R with its specially developed tuning components. The programme for the VW Scirocco includes a performance enhancement of up to 272 hp, a MTM Clubsport running gear, a 4-pipe exhaust system with rear skirt attachment, a 8-piston MTM Brembo brake and also exclusive, sportive ”bimoto“ rims.

Introduction offer: control unit, lowering kit + exhaust half system with 4-pipe muffler and rear skirt attachment:
Instead of a regular 3,479 € plus 828 fitting costs, now ONLY 2,990 € plus 828 € fitting costs.

Racy ride with the MTM Scirocco R
An optimal interaction of the MTM motor electronics including MTM middle- and end muffler, the MTM front muffler as well as the pre-tube with a metal catalytic converter. The individually produced MTM exhaust system for the VW Scirocco is available from 2,255 €. A performance enhancement up to 272 hp at 6,080 rpm can be achieved for the Scirocco. There are three different performance enhancements available: up to 245, 250 or 272 hp.

The Scirocco remains well-grounded
The high-performance MTM Clubsport running gear (from 1,489 €) which has been fitted in MTM Scirocco renders a better roadholding- and curve behaviour. The road grip is perfect and the driving dynamics significantly improved. The MTM Clubsport running gear consists of lowering springs and sport shock absorbers which allow lowering the car´s front axle by 20-40 mm and the rear axle by 10-35 mm. As a cheaper alternative, MTM offers the specially adjusted chassis springs. Not before long, also the MTM F-Cantronic will be available for adjusting the adaptive chassis regulation DCC.

Best possible brake safety for the Scirocco
Amongst others, vehicle safety is ensured by the 8-piston MTM Brembo brakes with brake discs and steel flex pipes measuring 330×32 mm, 365×34 mm and 380×34 mm. Costs: from 3,462 €.
The perforated brake discs which were especially produced for MTM immensely enhance the Scirocco´s appearance with their individually punched design.

Sportive rims „bimoto“
The design is perfected by the rim set „bimoto“. The rims which were created by MTM-technicians measure 19 and 20 inches and are available in ”shiny silver“, ”titanium“ and “diamond cut“. The “bimoto“ rims can be bought at MTM, starting at 1,876 €. In addition, MTM offers a complete wheel with the „bimoto“ rim “shiny” and sportive tyres by our tyre partners Michelin or Continental (235/35 19) from 3,166.50 €. Optionally, MTM also offers a gauge extension of 20 mm per axle incl. wheel bolts for 104.70 €.