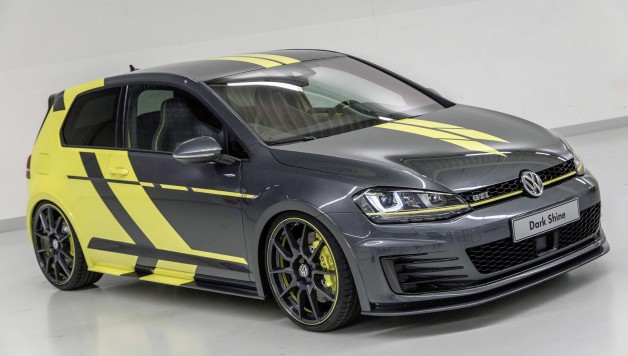 They have followed the call of the lake: 13 Wolfsburg apprentices from Volkswagen and group company Sitech Sitztechnik have traveled to the 34th Wörthersee GTI meeting today to present their 395 PS (290 kW) Golf GTI Dark Shine to the public for the first time. Their sporty two-door Golf features a two-tone color scheme. The front is painted in dark Daytona Grey Metallic and the rear in unique R-yellow pearl effect – giving rise to the name “Dark Shine”.

The Golf GTI Dark Shine is impressive confirmation of the high-quality practically oriented training provided by Volkswagen. From the initial idea to today’s world premiere at Reifnitz with an estimated audience of 150,000 car enthusiasts, the budding vehicle paint technicians (2), vehicle interior fitters (4), automotive mechatronics technicians (4), media designers (1) and process technicians specializing in plastics and rubber engineering (2) planned almost every step themselves, exchanged ideas, tried them out and realized the best. The 17 to 25-year-olds developed considerable specialist knowledge and skills. The four women and nine men grew into a strong team; Dr. Stefan Kreher, Head of Volkswagen Vocational Training, and project manager Holger Schülke are proud of them. 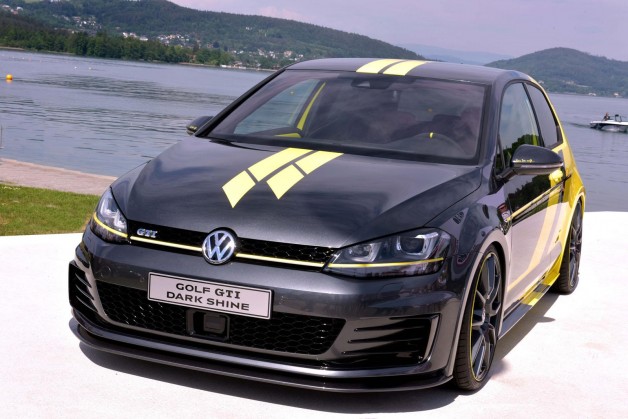 “By working on the Wörthersee GTI project, our apprentices learn about the complexity of automobile production,” says Kreher. During the creation of their dream GTI, our budding specialists cooperated with experts from a variety of different professional families. Kreher: “The project offers especially talented young people an opportunity to learn from experienced colleagues from the entire company at an early stage.”

Last fall, the 13 apprentices received a body in white in Wolfsburg; over a period of about nine months, they then made optical and technical modifications to create their dream GTI on the basis of the standard Golf GTI Performance1 in line with their own ideas. The modified 2.0-litre TSI engine develops 395 PS (290 kW). Maximum torque of 487 Newton-meters is available at 4,700 rpm. The stainless steel exhaust system with enlarged tailpipe trims is hand-crafted. The unique GTI also features a carbon air box. The intercooler and the control units for the engine and the DSG dual-clutch gearbox have been specially adapted. 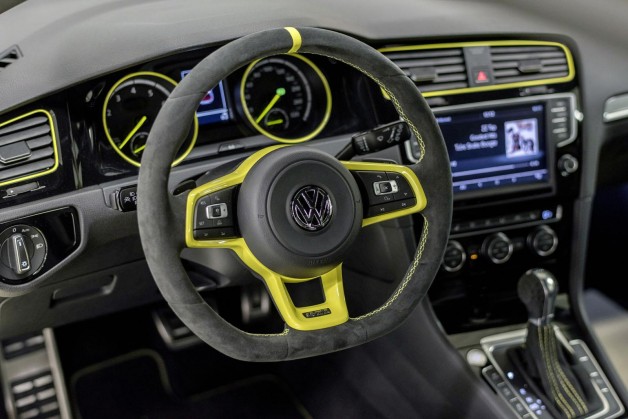 As regards the appearance of their show car, the team members selected an expressive two-tone color scheme. The front of the car is painted in Daytona Grey Metallic and the rear in R-yellow pearl effect, creating a dark-bright contrast between front and rear. Two offset arrow-shaped R-yellow pearl effect stripes run over the bonnet and to the rear third of the roof. At the rear of the roof, up to the roof spoiler, these stripes are then painted in Daytona Grey Metallic, contrasting with the roof itself. In addition, stripes and arrows on the side of the vehicle provide accents. The “Dark Shine” is entirely hand-painted, and was sanded down and polished several times to ensure a perfect paint finish with smooth transitions.

Many details in the interior take up the color scheme: the leather upholstery of the Recaro bucket seats and the bench rear seat is painted grey using a tone identical to the Daytona Grey exterior color. The central sections are covered in titanium black Alcantara and the side bolsters of the seats and backrests are covered in black carbon leather. In contrast, the GTI logos on the backrest of the bucket seats and the single or double felled seams are yellow. The bucket seats are also surrounded by restrained yellow piping. The multi-function steering wheel is covered in titanium black Alcantara, with the 12 o’clock marking, seams and spokes set off in R-yellow, together with the surrounds and needles of the instrument cluster. 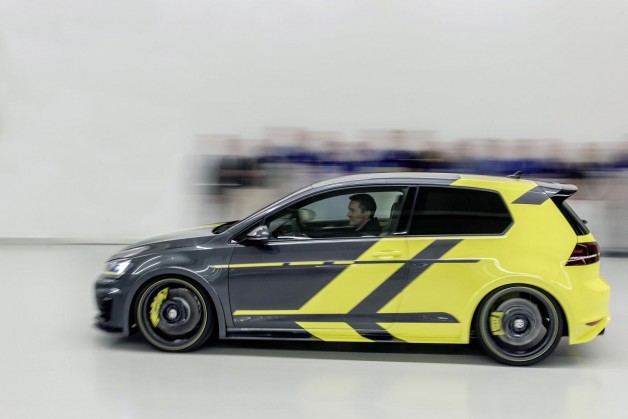 At the Wörthersee horsepower festival, a high-performance sound system is also essential. The unique GTI features a high-end audio system with a total output of 3,500 Watts. Eight speakers in the passenger compartment and three subwoofers in the rear deliver sound that is both powerful and crystal clear. The central subwoofer is lit by LEDs and partially glassed in. The amplifier, which also features lighting, is recessed in the floor of the trunk under a glass cover. The sound system can be controlled from a tablet computer.

Since 2008, Volkswagen has offered its best apprentices the opportunity to expand their specialist knowledge and to demonstrate their creativity and teamwork capabilities on projects like the Wörthersee GTI. The Golf GTI Dark Shine is the eighth apprentice GTI to make its world debut in Reifnitz. Its predecessors were also attractions at other public events such as the IdeenExpo in Hanover.

The Wörthersee GTI cars created by apprentice teams from Wolfsburg to date are: