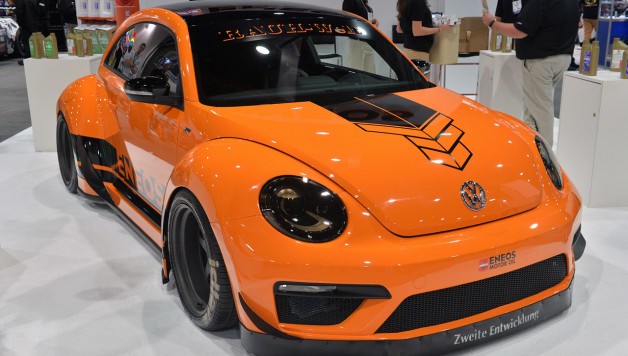 A Volkswagen Beetle that represents a collaboration between Volkswagen rallycross driver Tanner Foust and famed Porsche tuners RAUH-Welt Begriff is set to be unveiled this week at the SEMA show in Las Vegas.

The Tanner Foust Racing ENEOS RWB Beetle will be introduced at the Las Vegas Convention Center in the ENEOS Motor Oil booth (#24723) this week during the premier automotive specialty products trade event in the world. 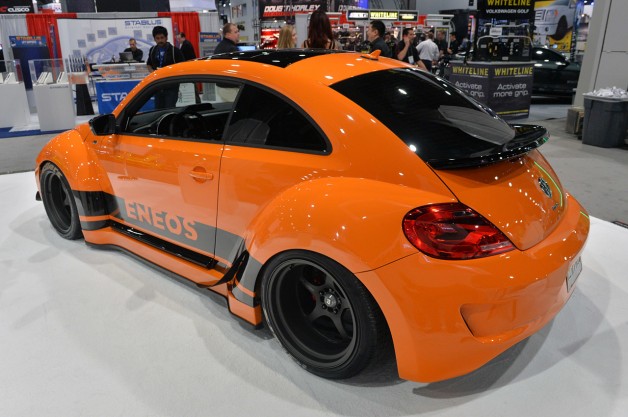 The 2014 Volkswagen Beetle R has been the subject of an extensive design process that added about eight inches of width in the form of a distinctive RAUH-Welt Begriff wide body kit.

“I love the engineering that Volkswagen puts into its cars — they’re packed with features and very capable — and I love the stylistic cues that you see from tuners in Japan,” said Foust. “I thought it would be interesting to mix the two and see what you would get.” 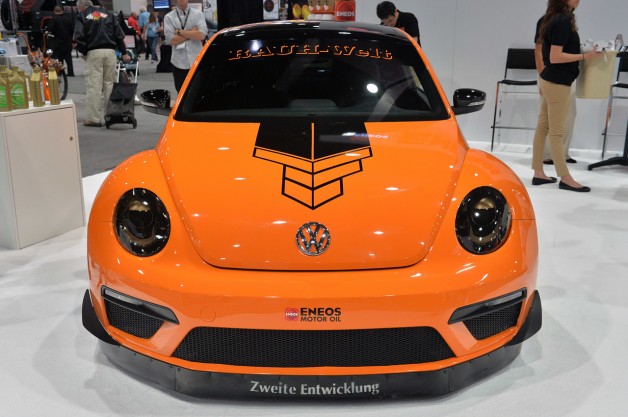 Foust and RAUH-Welt Begriff’s Akira Nakai have been in talks over the better part of the past decade to do a project together. While the Beetle may seem like an unusual choice for a shop known worldwide for its work with Porsche 911s, the historic connections between the two cars made it a good fit — although it required some innovation.

“Many Porsche owners like the Beetle. The Beetle is a very good car and it looks like a Porsche a little bit,” said Nakai. “It is similar, but a Beetle is not a Porsche, so we made a completely new design for this Beetle.” 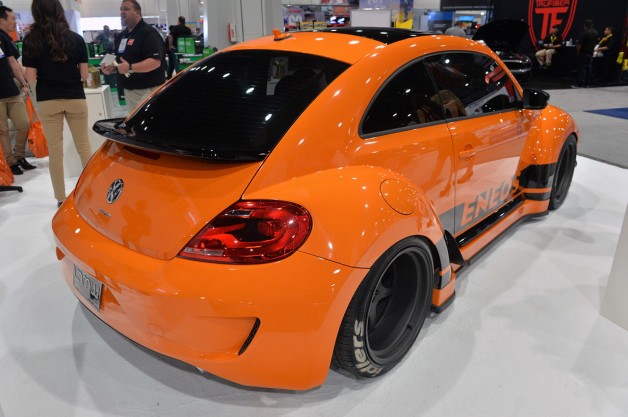 It is the first Beetle project for Nakai. The team at RAUH-Welt Begriff worked with LTMOTORWERKS, in El Monte, Calif., for the build. 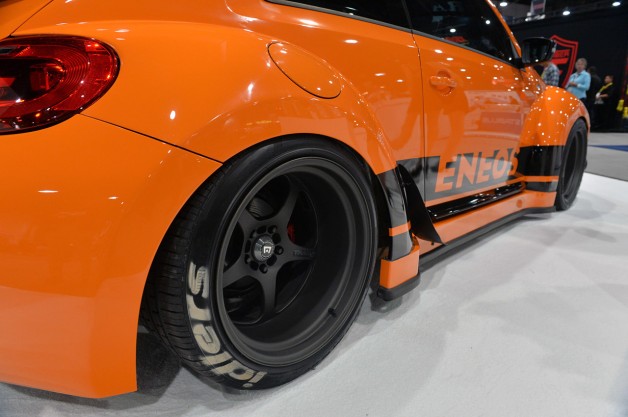 As part of the project, Alpinestars is partnering with Foust and ENEOS for a special shoe giveaway. One lucky fan will have the chance to win footwear from the Alpinestars Auto collection.

Foust will be at the ENEOS booth between 9 a.m. and 10 a.m. on Wednesday, November 5 for an autograph session. As a lifelong automotive enthusiast, Foust is a SEMA Show veteran and he said he is looking forward to returning this year. 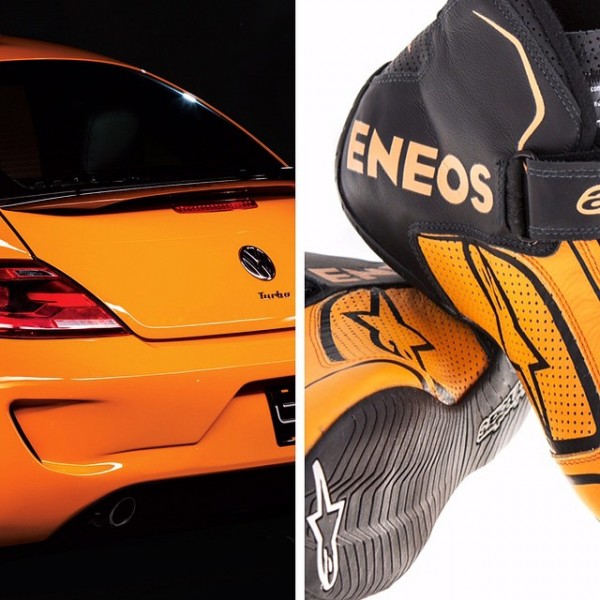 “It’s about making vehicles fit you and what you like about them,” said Foust. “It’s the place where you see cars that are personalized — whether that’s cosmetically to reflect your style or for performance — and that’s an awesome thing.

Additional appearances for Foust next week include a Monday evening autograph session alongside Volkswagen Andretti Rallycross teammate Scott Speed at Findlay North Volkswagen between 7:30 p.m. and 9 p.m., and at SEMA Wednesday with ODYSSEY Battery by EnerSys (Booth #24875) between 11 a.m. and 12 p.m.

On Wednesday evening, Foust will race his Rockstar Energy Drink Volkswagen Beetle in the season finale of the Global Rallycross Championship at the LINQ Hotel and Casino on the Las Vegas Strip.

Renowned Porsche tuner RAUH-Welt Begriff is based in Japan, with U.S. operations in California. The company is known for a distinct RWB style that combines Japanese and European tuning elements. Principal Akira Nakai has been designing cars for the street and track for 19 years, and the resulting RWB builds are some of the most coveted on the road today.

He has also held multiple world records including for the astonishing Hot Wheels Double Loop Dare, which saw Foust drive a car through a 66-foot loop-the-loop. He also scored the indoor speed record for TV’s Top Gear USA, and set a distance jump record with Hot Wheels when he made a 332′ ramp-to-ramp leap in a truck at the Indy 500.

His varied race experience includes multiple years of open wheel competition, the Pikes Peak Hill Climb, rally racing, various types of sports car racing and the SCORE Baja. He has represented the USA in the annual Race of Champions three times, teaming with NASCAR star Carl Edwards in 2008, Travis Pastrana in 2009, and Mick Doohan in 2010.

A year after making his overseas debut in the European Rallycross Championship in 2010 with a select campaign, Foust became the first American driver to win a round of that championship and finished both 2011 and 2012 ranked in the top three; he won two of the three rounds he entered last year. At home, Foust has been a dominant driver in rallycross since it was first introduced to the United States in 2010.

When he isn’t racing, the professional driver also performs in films and on television. He is an on-air host for the U.S. version of the seminal BBC auto show Top Gear, produced by BBC Worldwide Productions and airing on the HISTORY channel. Episodes of his online documentary series, Life in the Foust Lane, are available on the Rockstar Energy Drink YouTube channel.

Foust also handles stunt driving in numerous popular films, TV shows and commercials. He is featured as a stunt driver in the Need 4 Speed film, as well as other major releases including the Bourne Legacy, Bourne Ultimatum, Fast and Furious: Tokyo Drift, Dukes of Hazzard, Red Dawn and Iron Man 2 movies.