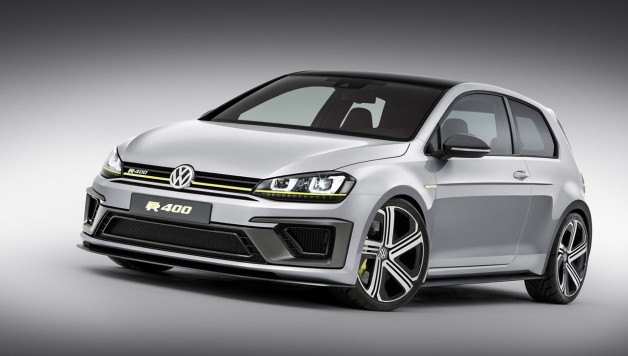 The latest Golf R production model was introduced just recently With 221 kW / 300 PS of power. All-wheel drive. It handles the sprint to 100 km/h in 4.9 seconds and attains a top speed of 250 km/h (governed) – this is the sharpest production Golf ever and one of the most agile sports cars in its class. But the potential of the Golf – which made its debut exactly 40 years ago and developed into one of the world‘s most successful cars – enables even further extensions to the limits of what is feasible in sporty performance. Volkswagen is demonstrating at Auto China 2014 just how far these limits can (currently) be extended in the world premiere of the Golf R 400 concept car. Its name reflects its mission. It is a Golf developed by Volkswagen R GmbH – the brand‘s sports car manufacturer. 400 stands for 400 PS (294 kW). The powerful engine with the genes of the WRC racing version propels the Golf to 100 km/h in 3.9 seconds. Its top speed, assuming that a German motorway or race course is available: 280 km/h (governed). 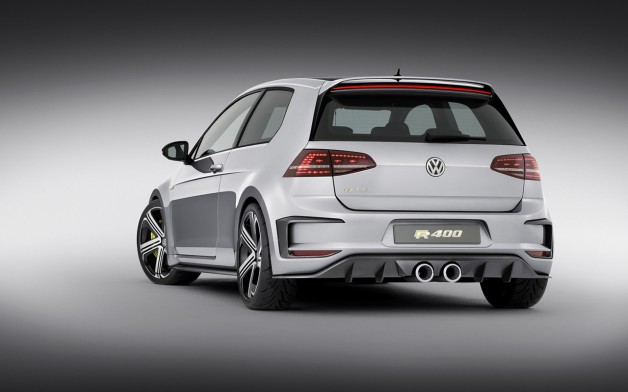 3.55 kg per PS. The Golf R 400, including its all-wheel drive system, weighs just 1,420 kg thanks to its compact high-performance engine (2.0 TSI), lightweight dual-clutch gearbox and low body weight. Its weight-to-power ratio is a dominant 3.55 kg per PS. The permanent all-wheel drive system by Volkswagen – 4MOTION – is also one of the most fuel-efficient systems of its kind. In addition, the Golf is also exceptionally aerodynamic, as the R 400 as well. Perfection in details runs through the entire concept of the Golf R 400 – from the engine to the largely new body design. This extreme Golf is painted in „Silver Flake“; creating a contrast to this light metallic colour are the car‘s glossy „Black“ roof and mirror caps in genuine carbon. Also designed in painted carbon effect are the splitters (wrap-around aerodynamic parts) adapted from motorsport and genuine carbon accents in the interior.

Special features of the Golf R 400 in detail: 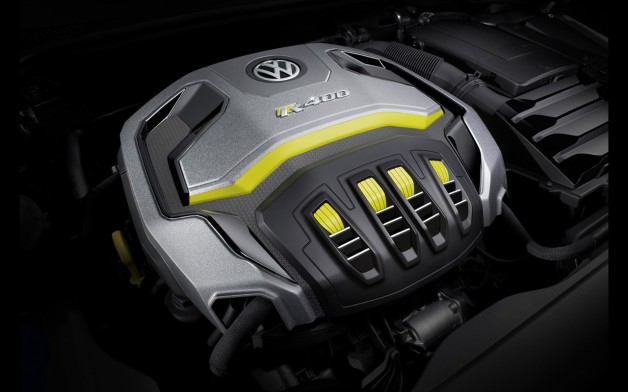 R400 all-wheel drive system and running gear
4MOTION. Typical of all Golf R cars, due to their exceptional power reserves, has always been their permanent 4MOTION all-wheel drive system. Of course, this also applies to the Golf R 400 being shown in Beijing. In this car, the all-wheel drive system is coupled with an automatic 6-speed dual-clutch gearbox (DSG), which can also be shifted manually as an alternative via the gear shift lever or steering wheel paddles.

Clever control. The 4MOTION all-wheel drive of the Golf R, which has been perfected with such features as a Haldex-5 coupling, is activated even before slip occurs. Traction loss is practically prevented by this. The system makes use of a pre-control strategy here, which depends on the specificdriving state. Under low load conditions, or during coastdown, the front wheels transfer most of the propulsive power, while the rear axle is decoupled. This basic tuning saves on fuel. If necessary, the rear axle of the Golf R can be variably engaged in fractions of a second as soon as this becomes necessary. This is done by means of the Haldex coupling that is activated by an electro-hydraulic oil pump.

EDS, XDS, ESC Sport. Along with the Haldex coupling, which acts as a central differential lock, the electronic differential locks (EDS) integrated in the Electronic Stability Control (ESC) system act as transverse differential locks. In addition, the Golf R 400 is equipped with the XDS+ system on both the front and rear axles, which brakes the wheels at the inside of a bend during fast driving through bends, and which optimises steering response as a transverse differential lock. Last but not least, the Golf R 400 has an „ESC Sport“ function like that of the production model. The system is activated via a two-stage switch on the centre console. When the driver presses the button once briefly, this selects the „ESC Sport“ mode of Electronic Stability Control (ESC). During very fast driving with lots of bends – e.g. on a race course – the ESC does not intervene as frequently, which enables even more agile handling properties. If the ESC button is held down more than three seconds, the system is fully deactivated for professional drivers on a race course. 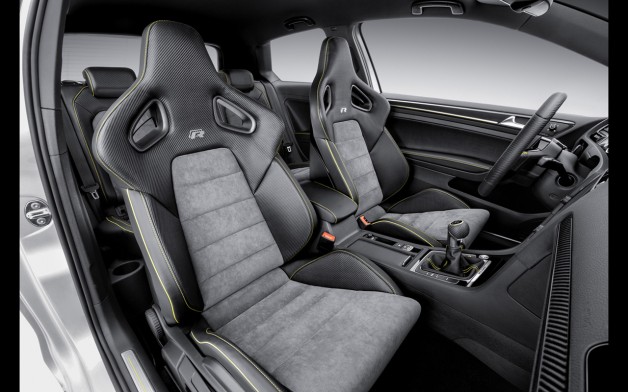 Sport suspension and new wheels. The sport suspension of the production Golf R, which lowers the ride height by 20 mm compared to the base Golf, did not have to be changed for the Golf R 400 thanks to its large power reserve. In front, the two Golf R versions each have a MacPhersontype suspension with lower wishbones, while what is known as the modular performance suspension (multi-link suspension) is used at the rear. The tyres are also the same on both cars: 235/35 R 19. The alloy wheels of the Golf R 400 are a new development. Their design is based on the 19-inch „Cadiz“ production wheels, but they were highly modified and equipped with high-gloss black inserts which, as air vanes, perfect cooling in the reinforced brake system.

R 400 exterior
Side profile. Volkswagen Design made wide-ranging design changes to the Golf R 400. For one, the body was widened by 20 mm on each side to accommodate the 19-inch wheels that are further outboard due to their larger wheel offset. In front, the designers developed an entirely new wing, which – as a modern interpretation of the legendary Rallye Golf G60 (from 1988) – are significantly flared. Similarly, the rear side panels over the wheel housings of the Golf R 400 were also flared. The wheel arches are painted in body colour as a uniform part of the new wings and side panels. In addition, the bottoms of the sides are characterised by a wrap-around splitter made of visual carbon that is a very flat aerodynamic element derived from motorsport. Perfection in the details: the fibres of the visual carbon parts in the exterior area that just have a matt coating are aligned in the driving direction, and as arrow-shaped elements they emphasise the dynamism of the R 400. Above the splitter, designers also adapted the side sills to the new contours, creating a uniform transition to the newly designed wheel arches. 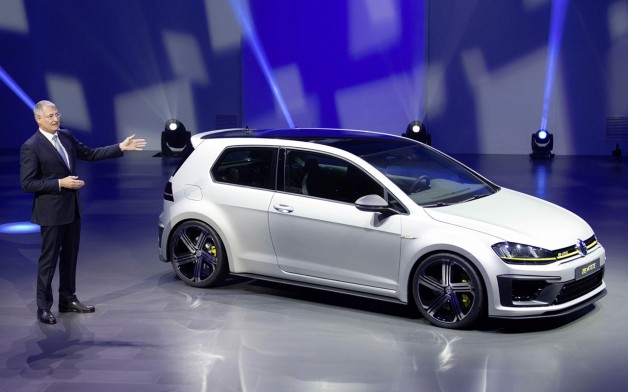 Front end. Designers have redesigned the front end of the Golf R 400 as well. Beneath the high-gloss black radiator grille with its „R badge“, on a background in „Lemon Yellow“, the Golf R 400 also features a line in „Lemon Yellow“. Similar to the line of the Golf R (chrome line), Golf GTI (red line) and the new Golf GTE (blue line), it forms the termination of the grille towards the rear and continues into the headlights on the left and right. Beneath this line, there is a type of slot that serves as an air inlet on the Golf R 400 to help cover the car‘s elevated cooling requirements. The bumper was also completely redesigned. The central air inlets have a surround that is a wing-like element made of carbon effect, which visually appear to hover in the bumper. The lines of this aerodynamic element run horizontally up to the height of the bi-xenon headlights, then they bend in a V-shape towards the rear, and finally describe the form of a C (left) and a reversed C (right). Self-contained wing elements in high-gloss black also hover in the lower air inlets. Between the aerodynamic element of visual carbon and the high-gloss black wings (as well as within these black elements) there is a protective screen whose honeycomb structure – like so many details of the Golf R 400 – is reminiscent of motorsport vehicles. Since the wing element protrudes somewhat further forward, this gives it a progressive three-dimensional appearance. As in the side profile, there is also a motorsport-derived splitter in carbon effect at the front.

Rear section. At the rear, the wrap-around motorsport splitters transition into a diffuser, which – like the front wing element – protrudes slightly out from the body. Integrated here are the two central exhaust tailpipes. The reason: in contrast to the Golf R with its four tailpipes (two each, left and right), the Golf R 400 follows the design of the Golf R32 – the original R-series model presented in 2002. Specifically, there are two polished tailpipes with a diameter of 110 mm, which are spaced 200 mm apart from one another and extend slightly upwards. Perfection in the details: the exhaust tailpipes have an inner part that is visible from the outside, which repeats the honeycomb design of the front air inlet. The designers also redesigned the rear bumper; at each end of the bumper there is a carbon inlay in a C-shape (reversed C on the right). The reflector is integrated in the lower horizontal part of the C; the vertical part protrudes slightly from the bumper. Here the designers have worked in a wheel arch exhaust vent. 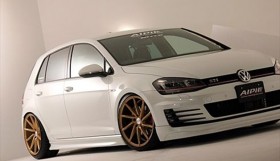 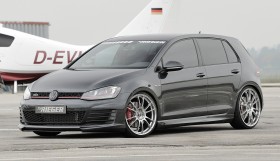 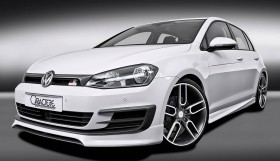 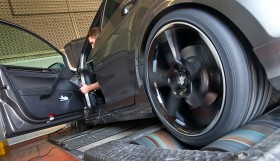