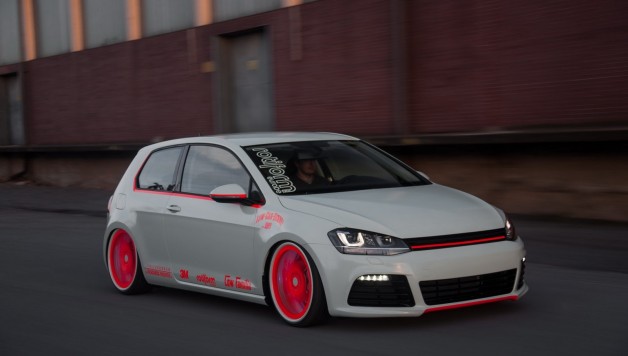 The current VW Golf VII – which was chosen in the market since the autumn 2012 and 2013 European car of the year, as well as WCOTY (World Car of the Year) – is the third model, which is based with the magic formula MQB on the new platform of the Volkswagen group, which means nothing else, but modular transverse matrix. As much as possible, if possible, even ubiquitous synergies – that is the credo of all global players. 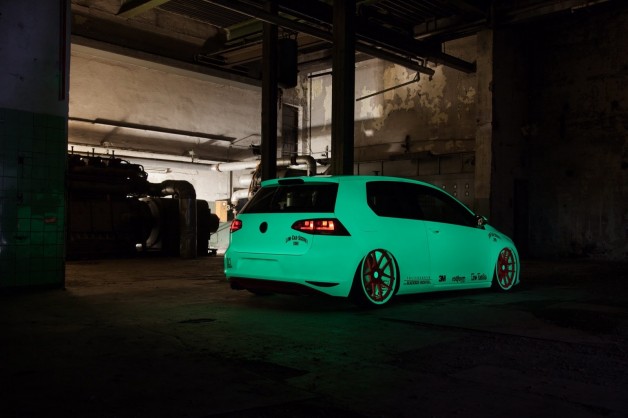 However, before the modifications of already initially quite luxuriously equipped Bestseller are examined in detail, being first of all the foliation of the vehicle, for which the amount of work requires approximately three days. It is realized by the company BlackBox-Richter in the Austrian Schardenberg – to put this into perspective in the truest sense of the word. Golf which is originally born in deep black pearl effect is foiled with a special phosphor-foil from 3M, in fact, completely only for show purposes, it means including mirrors and doors handles, ant thus, also in the dark unmistakable. The banners of the advertising partner are applied in signal red foil as a perfect contrast. 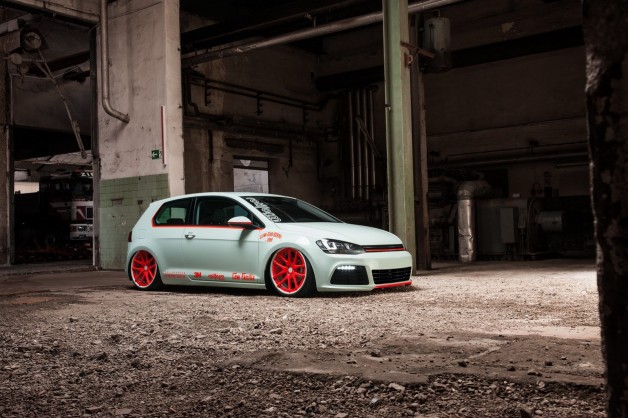 But that’s not enough: inner and outer wheel beds are also provided with this special foil, while the centres are lacquered in signal red. A completely uniform light charge on the inside of the rim is additionally achieved due to LED-lighting – which is mounted on the mudguard of the brake. The company Low-Car-Scene and BlackBox-Richter, whose chef Mingo RICHTER and his entire team provide with this Golf VII once again the proof of their ingenuity and versatility.

Non other than Hans-Jürgen WINDPASSINGER from Low-Car-Scene, the not far from Schardenberg located Esternberg, has once again upgraded with so several transformations the tree-door 1,4-liter-Golf VII TSI Highline with 140 hp (103 kW), which has left the plant already with Bi-Xenon-head lamps with LED-Daytime Running, rear view camera, leather trim with massage sits, Keyless Go start automatic, navigation system with colour display, as well as multifunctional steering at the original price of 32.000,00. 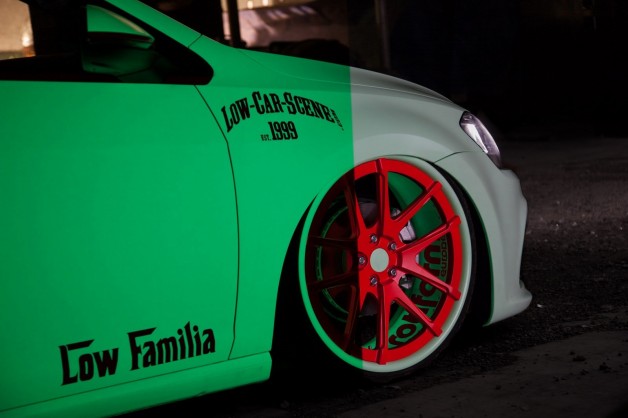 There are, for example, three-piece Rotiform-forged wheels SNA in 8×20 inch ET45 with bolt circle 5×112 (6.000,00 €), as well as air ride-system called RideAir Version 3, by the way a special product of the company Low-Car-Scene (3.600,00 €). Furthermore, the front bumper has been cut apart and the lower approach was joint together with Golf VI R-line-bumper, the whole thing is of course also unique.

Bonnet and bumper are welded and the original grill, which is also a special product, was extended with new struts, making the VW-emblem cancelled without replacement. The conversion works, due to which also the rear wiper has fallen victim, take about three weeks.