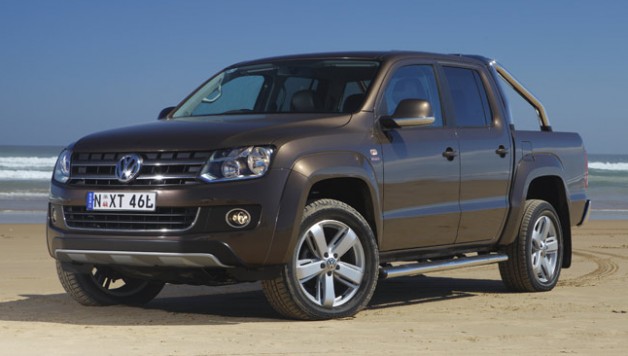 The Amarok is VW’s foray into pick-up territory, and all things considered the company has acquitted itself well. It’s a robust workhorse that does what it’s designed to do without unnecessary compromise – making it a comfortable, responsive and useful vehicle that ticks a lot more boxes than most of its immediate competition.

The Amarok is supposedly named after a huge wolf from Inuit mythology, which sought out and devoured lone hunters at night. This wild and dangerous streak is reflected in the chunky pick-up’s aggressive bodywork and looming size, but that’s not to say it lacks much in the way of refinements. There are three model lines: the Base version, the midrange Trendline, and the Highline. Each have lots of optional accessories. Every year brings new variations on the theme, but since 2010 the 2.0-litre engine has been standard, with 2012 bringing an 8-speed automatic transmission to complement the 6-speed manual.

Big, bold and beautiful
VW is a solid brand and the Amarok is no exception. The build quality is sound, and it’s a good-looking vehicle too – muscular but sleek like the wolf it takes its name from. The loading bay is impressively spacious – more so than a lot of similar vehicles. Here’s where some drivers might see the first catch, though: at 2.2 metres wide and more than 5.2 metres long, the Amarok might be just a little too bold for anyone who regularly has to negotiate narrow lanes or park in spaces designed for conventional cars.

Despite its imposing size, it’s a great drive and handles well. There are both permanent and selectable versions for 4-wheel drive, though the permanent system comes with reduced loading capacity (1,600 kg rather than 1,860). The permanent version is optimised for road use.

The 2-litre engine is certainly powerful enough to do the job, delivering up to 177 bhp, but tends to struggle a bit at lower revs. Once you get going there are no complaints, though. The fuel efficiency is good considering the Amarok’s size – mpg figures given are generally in the mid-30s, though that’s for unloaded weight and will come down a bit for town driving. The 80-litre tank is going to be expensive to fill, but you should manage 600 miles on it.

Inside, it’s spacious and comfortable enough (with room for five in the cabin), if leaning just a little towards the utilitarian end of things. There are any number of bells and whistles you can buy, including SatNav, parking sensors – highly recommended, given its size – bluetooth and iPod adaptor.

Verdict
The Amarok manages to combine the rugged functionality required of a pick-up with the style, safety and efficiency that are bywords for VW. It’s big, there’s no denying it, and that may cause problems for some prospective buyers. It’s also classed as a commercial vehicle, which might put a few others off. But if you’re looking for a pick-up that (almost) doubles as a family car, you might have found what you’re looking for.

This article was brought to you by used Volkswagen parts location specialists – BreakerLink.com 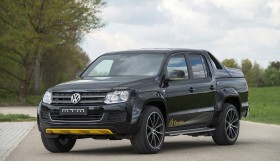 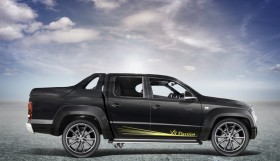