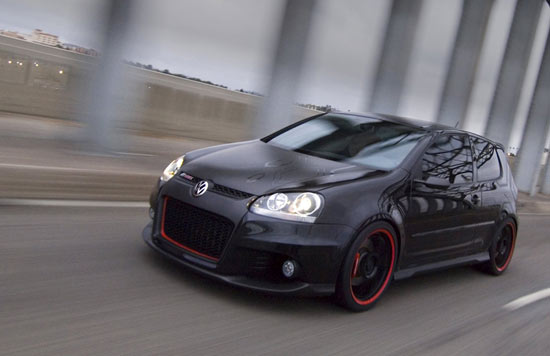 Thirty years ago Volkswagen launched the GTI, the “hot hatch” that would revolutionize the concept of affordable and accessible high-performance motoring. Now comes the R GTI, a look forward into the future of compact car performance, making its debut at the 2006 SEMA Show in Las Vegas..

Few cars have enjoyed such an enduring run of success, and to honor the GTI’s rich past, Volkswagen has cast an eye on the GTI of tomorrow with the R GTI, a low-flying stealth machine developed by Volkswagen Chief Designer Derek Jenkins and his talented crew at the Volkswagen Design Center California, located in Santa Monica. With its striking carbon-fiber body panels, four-passenger sports car interior, powerful turbocharged engine and competition-bred suspension, the R GTI is a stimulating fusion of style and dynamic excellence, fully modern in content and achievement yet staying true to such longstanding Volkswagen values as drivability, durability and utility.

In collaboration with the firm OSIR Design, hand-laid carbon fiber component experts, Jenkins replaced the stock GTI’s front fenders, hood, side rockers, and hatch door with carbon-fiber panels developed by both OSIR and Jenkins’ in-house team. In addition to providing a weight advantage, the carbon fiber’s black weave creates a dazzling visual complement to the lustrous black paint scheme, which itself was adorned with hexagonal “stealth” graphics that echo the grille of the original GTI. 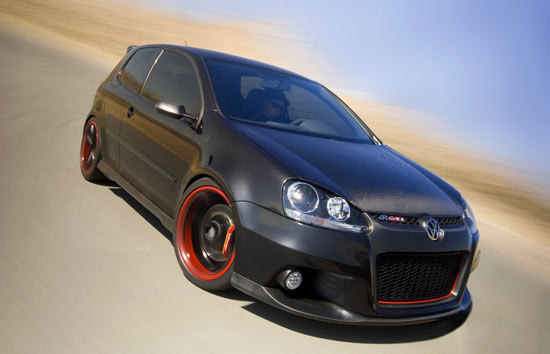 Reference to the GTI’s trademark hexagonal grille pattern is also seen in the R GTI’s specially constructed 19×9-inch aluminum alloy wheels, with lightness as a crucial contributor to reduced unsprung weight, and improved ride quality and cornering. Tucked within fenders designed for additional clearance, the beefier running gear includes Michelin Pilot Sport Cup ultra-high-performance radials, sized 265/30 R19. In track tests, the larger tire footprint proved to be a valuable ally in transferring the engine’s prodigious 340 ft-lb of torque to the ground. Despite being rolled straight out of the design studio on to the track, the R GTI pulled off an impressive zero to 60-mph time of 4.8 seconds. 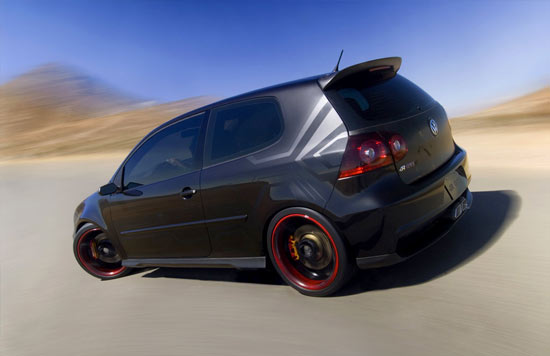 The chief contributor to the R GTI’s impressive performance is the turbocharged engine developed in conjunction with APR, one of the country’s leading aftermarket Volkswagen tuners. APR develops and sells high performance, and high performance only, leaving others to peddle air fresheners and floor mats. APR’s engineers and product developers are passionate about Volkswagen technology, and it shows in the quality and results of their contribution to the powertrain.

It all starts with Volkswagen’s 2.0-liter FSI turbocharged four-cylinder powerplant, an award-winner for its unique combination of direct injection and turbocharging. APR also replaced the turbocharger with a larger Garrett ball-bearing unit with twice the flow capacity and pumped up the boost to 21 pounds per square inch. All of the pressure-side plumbing was strengthened with silicon hose. A large-diameter cast-aluminum, black powder-coated intake pipe feeds the big turbo the cool air it needs from the larger, front-mounted intercooler, delivering twice the stock air flow. An Inconel exhaust manifold and an APR stainless steel exhaust system ensure efficient flow-through. It’s a tidy, factory-like transformation, and the result is a whopping 375 horsepower, on 93 octane pump gas. If 100-octane race fuel is used, output rises to some 400 horsepower. 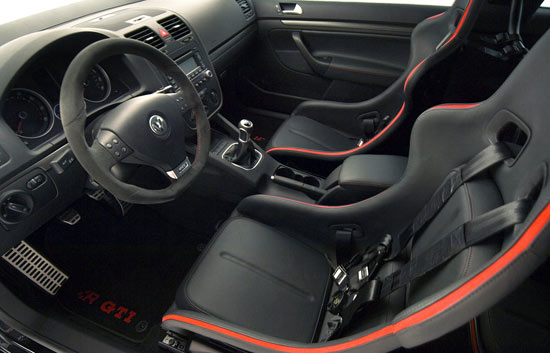 The exciting visual impact of the R GTI exterior is reflected in the interior, which is swathed in black leather complemented by red stitching. This theme runs throughout the cockpit, from the upholstery that covers the front Recaro Pole Position sports seats and rear custom-designed racing buckets, to the door panels and steering wheel, which also sports an R GTI logo. The effect is a blend of understated luxury and purposeful technology, underscored by the use of OSIR black carbon-fiber interior trim on the dash panel and in the doors.

Just aft of the front bucket seats is a clever safety belt system that was developed in the design studio. A remarkable example of the innovations that spring from Jenkins’ creative team, it’s comprised of a bar that anchors the front racing harnesses, which can swing up and out of the way to allow passengers easier access to the two rear seats. As part of the R GTI’s weight-reduction program, the stock rear seats were removed and replaced by an exceptional piece of carbon-fiber craftsmanship. The single piece of composite was fashioned into two racing buckets, each fitted with padded leather inserts. They’re a snug fit but are comfortable enough to take the in-laws on a fast lap or two. Another trick interior element is the custom aluminum billet shift knob, which Jenkins fit with a red “wheel” that can be revolved by the driver’s thumb. Look closely, and you can see that the wheel has been inscribed with the R GTI logo. 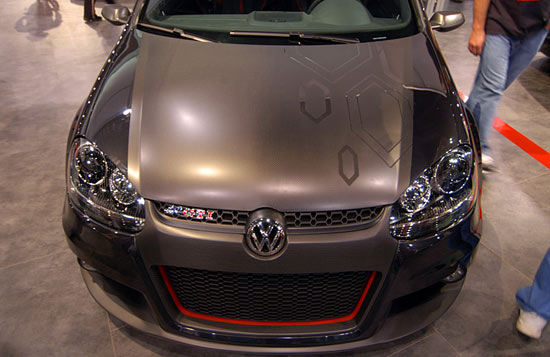 The R GTI is an uncommon and visionary blend of design talent, factory technology and aftermarket innovation, and an enticing demonstration of why Volkswagen has been a favorite of automotive enthusiasts since the GTI first hit the scene 30 years ago. It also shows that the future of the hot hatch, as demonstrated by the R GTI, is already here. 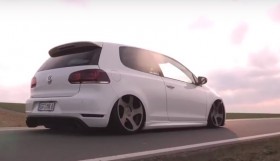 Volkswagen GTI – 40 Years Of Fun. Back To The Roots 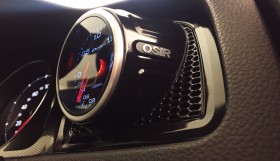 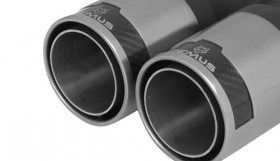