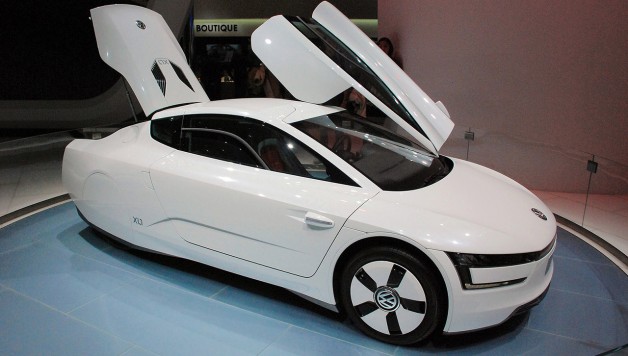 XL1: The Most Efficient Volkswagen Ever

The One Liter Car
Volkswagen’s XL1 achieves the miraculous by providing its lucky driver with 235 mpg of fuel consumption. Yes, that does say 235 miles per gallon. No, that is not a misprint or a typo. Volkswagen has again achieved a huge breakthrough in car engineering, by designing this futuristic vehicle for the supremely eco-conscious. In European measurements, that means that this is truly the one liter vehicle that’s been proposed for so long. The xl1 uses one liter of fuel to go 100 kilometers. Volkswagen has done it.

How Did They Do It?
There was no one way to redesign a car and manage to get that kind of fuel consumption as a result, so Volkswagen engineers made a number of changes to the way cars are typically designed. A hybrid drivetrain was one key component, as well as an aerodynamic design to reduce drag.

The biggest focus, however, was on the weight of the vehicle. In order to reduce weight, Volkswagen completely redesigned the way we expect cars to look, giving the XL1 ostrich wing doors, eliminating insulation, and using lightweight materials throughout. The body of the car is made from carbon-fiber reinforced polymer, and the splitter, diffuser and other lower body components are made from carbon fiber. Many other parts are aluminum or plastic. This gives the XL1 a total weight of only 890 kilograms, or about 1900 pounds. To further optimize weight, the vehicle holds only a small amount of diesel fuel in the tank. You can fill the Volkswagen XL1 up with only 2.6 gallons of fuel.

The Drivetrain
The XL1 is a hybrid in every sense of the word, and it is a hybrid which has been taken to its maximum potential. There are two engines. One is a 27 hp battery powered engine, and the other is a 47 hp diesel engine.

The car can run on battery power alone at optimal conditions for about 31 miles. At that point, the battery can be recharged by plugging it in at a recharge station, or it can recharge while you switch the car over to run on diesel engine.

The battery operated engine, with less horsepower than the diesel, is nevertheless very effective and enjoyable for city driving. The diesel engine has a better acceleration rates, and can smoothly increase speeds from 0 to 60 in about 12 seconds.

The maximum speed the 47hp diesel engine is capable of is about 99 mph. The readout on the dash will display the amount of power being drawn from battery, engine and motor so that you can adjust your driving speeds or acceleration rates as desired.

When being driven in optimum conditions and by a driver with a steady driving pattern and a light foot on the pedal, the Volkswagen XL1 will take you 749 miles on one tank of fuel. In case you are not driving at optimum fuel consumption rates, the car provides an electronic display that will tell you just how you’re doing with your fuel efficiency, so that you can adjust your driving as necessary.

How Does It Look?
The Volkswagen looks like a car of the future, which is exactly what it is designed to be. At just 42 inches tall, the car hugs the ground unlike anything else on the market. The low slung body and chassis coupled with the aerodynamically designed hatchback give it a sleek and stylish profile, which was designed in a wind tunnel to completely minimize drag. The scissor doors that open up and out are reminiscent of a sci-fi movie. When you climb into the XL1, you actually have to drop down about 3 inches into the seat, making you feel as though you were climbing into a cockpit, not getting inside a car.

The XL1 is a two seated vehicle, and the engineers have staggered the spacing of the driver and passenger seats to allow for maximum comfort in minimal space.

Super-Efficient
Volkswagen calls their XL1 the SEV, or Super Efficiency Vehicle. Although an initial production run included only 200 cars, produced in Germany, this huge breakthrough will not be the last Volkswagen super car we see on the roads of the future.