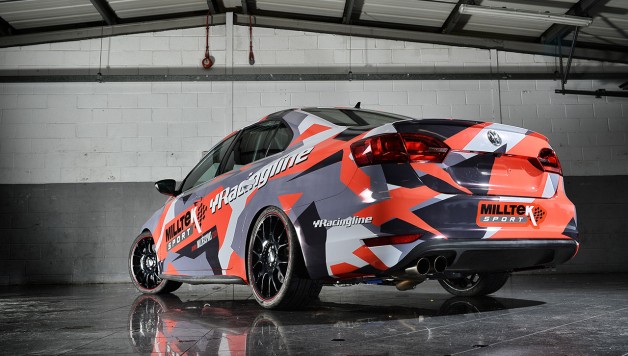 When looking for its next track and demo car, exhaust maestro Milltek took a slightly leftfield route – using a more transatlantic VW canvas and a whole heap of impressive parts and friends along the way…

The factors that create the basis of a project can often be random and varied. Speaking from personal experience, they can come from a diverse range of influences.. Anything from the desire to tick off some kind of bucket list, through to scene acceptance, or indeed, good commercial sense. In the case of Milltek’s managing director, Steve Pound, there’s more than a hint of the latter involved, but when you also hear that “It had been in a ditch and was cheap – and no-one else has got one” then you start to realise that there’s an element of serendipity involved in the company’s latest track weapon. 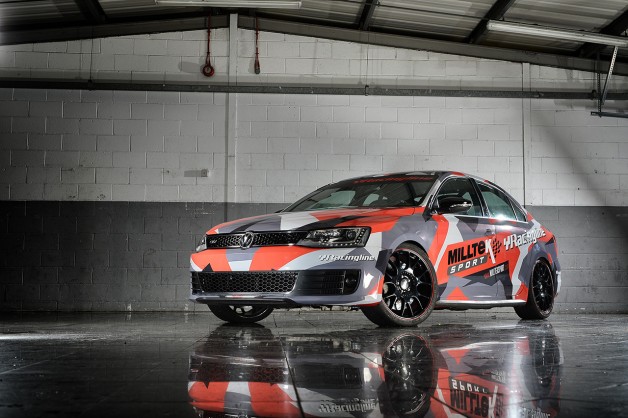 The story begins when Steve decided that the company needed a dedicated road-legal track tool to slot alongside its more race focussed petrol and diesel Golf race cars, which it runs with leading prep outfit, KPM Racing. “We needed something on-brand for us, to allow us to showcase our VW Group range,” explains Steve, “but after scanning through various ads for Golfs, Passats and various Audis, even I was surprised to find a Jetta GLi on this side of the water.” A rare bird indeed outside of its native USA, the Jetta GLi is indeed an unusual sight. This one had much to commend it initially. On the upside, its US serviceman owner, scant mileage and brilliant red hue made it a great canvas. On the downside however, the fact that it had enjoyed an unhappy clinch with a ‘B’ road ditch, meant that it was less photogenic than when it had left the factory. None of this worried Steve though; with KPM’s bodywork team on standby, and a desire to gut the car back to a shell anyway, a few misshapen panels and a little grass here and there proved to be nothing more than a bargaining chip. Factor in the left-hooker status, and the unusual spec, and the now bargainous and unsuspecting GLI was soon on its way back to KPM HQ, where owner Kevin Poole and Steve cracked open a beer or two to toast the new arrival and begin their fiendish plotting. 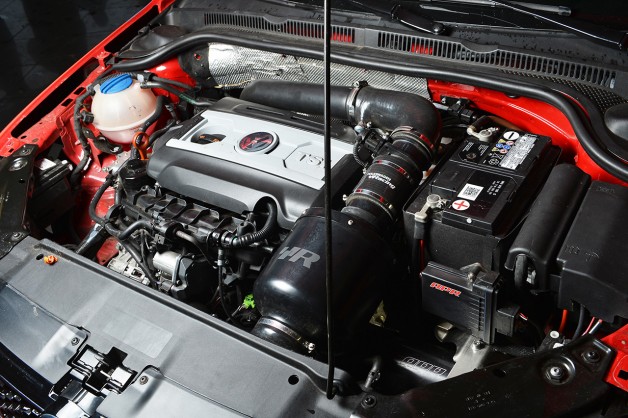 That the car would be repaired, stripped and track-prepped was a given, but even a grizzled veteran like Kevin was slightly shocked by Steve’s plans for this car. “We cooked up the idea between us that what we really needed was a track-prepped Haldex 4WD set-up!” laughs Steve. Well.. we’ve all been there, haven’t we?…

This made sense on a lot of levels. Not only did Kevin have access to the perfect donor, in the shape of an equally bruised and battered S3, but this new, higher level of performance meant that one of Milltek’s other good buddies could also be invited to this increasingly boisterous party; and that was to be VW Racing. 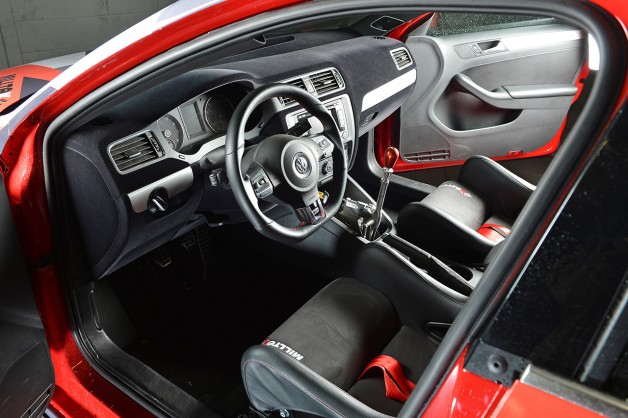 As another of Milltek’s serial partners-in-crime on a number of projects, VWR has been working with Milltek’s competition division for years. Add to this the fact that Milltek is the title sponsor of the VW Racing Cup, of course, and here was a holy trinity of talent and ideas that meant that the next phase in the Jetta’s life would be twice as fast and three times as exciting as its early mileage. As you might expect from this enviable pool of talented motorsport prep artists, work, parts and ideas began to flow at a rate of knots, with KPM blitzing into the strip and rectification of the shell immediately. 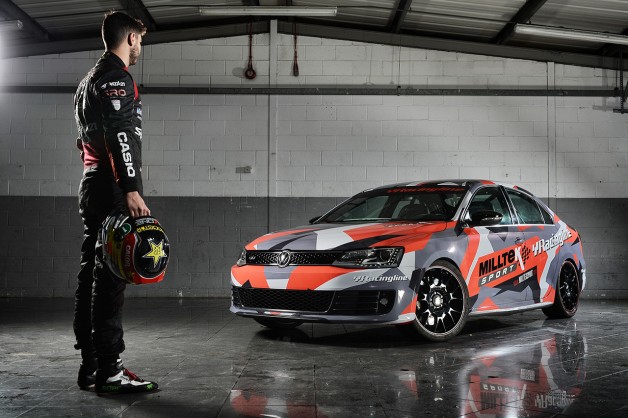 Although the S3 would yield many great parts, there was still much to be done – starting with a custom propshaft to allow the motive parts to fit with the Jetta’s longer wheelbase. The factory turbo was also deemed unworthy of making the final cut, to be replaced with an infinitely preferable and aerobically superior Garret GTX2876 blower instead, meaning that the Jetta should have the poke to match its forthcoming poise.

The old S3 engine was to create a few further upgrade requirements too, not least of all a set of VWR engine mounts, intake system and the fitment of a USP Motorsports low-pressure fuel pump and injectors to make sure that the car’s potential thirst could be suitably slaked when being driven hard on track. Amazingly, KPM was able to make this impressive cocktail of parts run using the factory ECU, although, as Steve implies, “More than a little magic has been dusted over the code in there…” 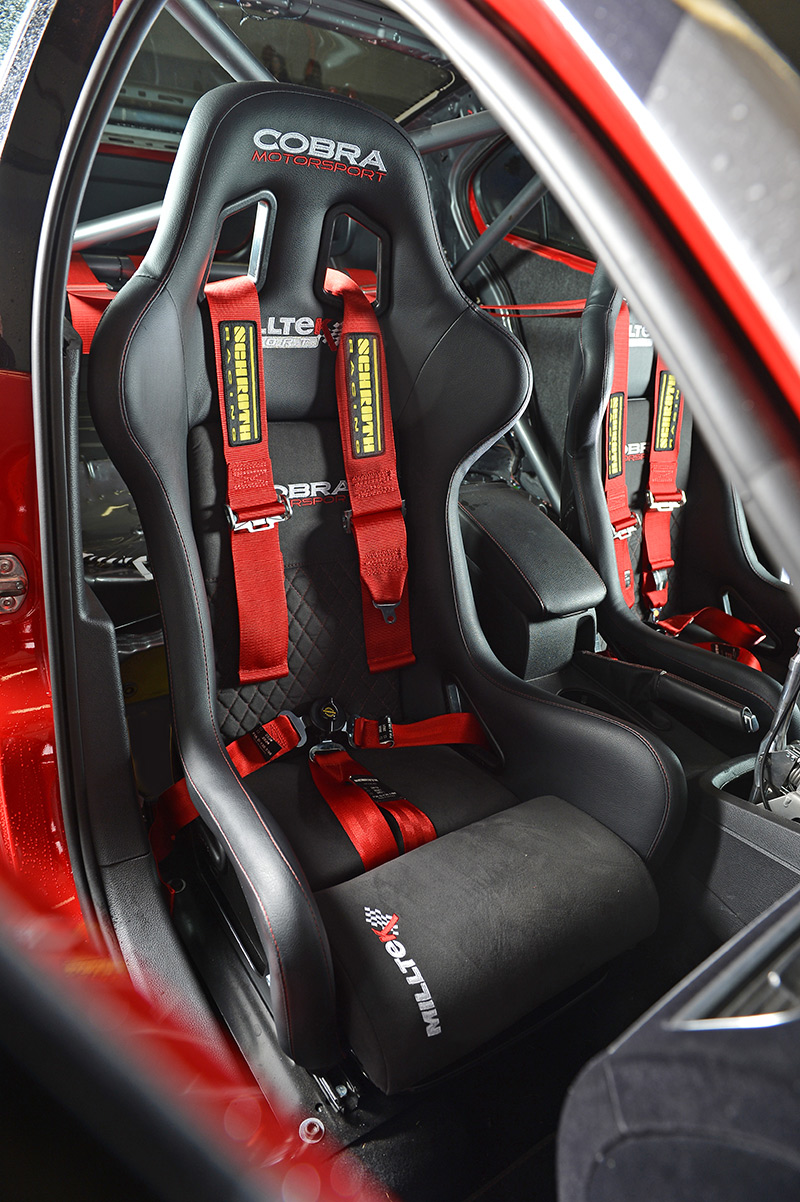 Naturally, the exhaust would need to be the centrepiece to this engineering meisterwerk, and Milltek’s Derbyshire factory suitably obliged with a full race-spec 76mm turbo-back system, replete with smart GT80 trims for a demeanour that looks equally at home in the paddock as it does on the driveway. With that fitted, KPM looked to improve the rest of the drivetrain and powerplant, bolting up a Wagner Tuning Competition Intercooler and adding a CAE Raised Gear Shift, Short Shift, complete with uprated cables for good measure.

Speed, torque power and an unbelievable soundtrack were in the bag then, but with a lifetime on track ahead of it, the work on the Jetta was only just beginning. The next set of tasks would see the KPM team raiding the VWR parts stores in order to fit a plethora of chassis-enhancing goodies. The factory stoppers were never going to be able to stop this creation, so sensibly, a set of VWR Front 6 pot brakes, with 352mm floating discs, now reside in their place. The rears have been usurped by a VWR rear disc upgrade that uses the original Audi S3 rear calipers. The system also now runs through a manual brake bias adjustment system to allow fine fettling to account for weather and track conditions. 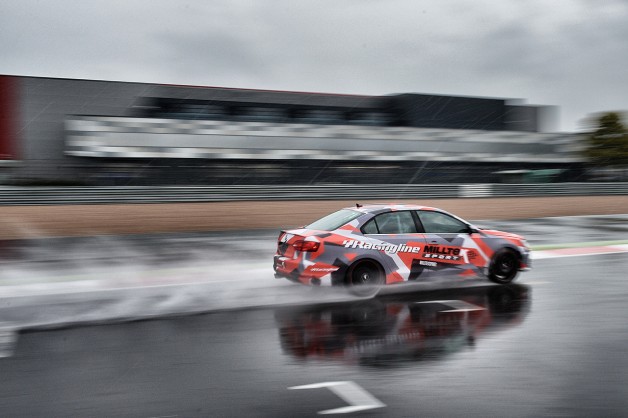 Drawing heavily on its enviable competition knowledge, VWR also supplied its 4-way adjustable race coilovers, augmented by its 3-way adjustable anti-roll bars, endowing the Jetta with the kind of cornering performance that would now worry its more expensive cousins down the road in Stuttgart. The final ingredient in any chassis package of course is always the wheels, and here, Steve wanted the Milltek Jetta to look as well as it worked. Balancing dynamics and aesthetics is never an easy task, but VWR’s 18×9” lightweight race wheels, suitably shod with 235/40/18 Dunlop Direzza tyres fit the bill perfectly for track work. Out on Her Majesty’s Highway, the car usually sports its elegant and attractive set of custom-painted BBS CH 19×8.5 hoops, which fill the arches pleasingly and suit the car’s proportions even more. 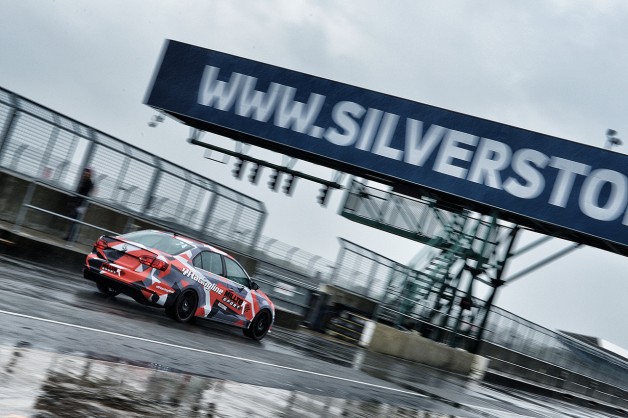 With so much mechanical promise bolted to the now pristine shell, it would have been a travesty not to allow the lucky driver to connect directly to it – and this would require the fitment of a set of suitably safe and figure-hugging seats from the skilled seamsters and seamstresses at Cobra Seats in Telford, who created a beautiful pair of lightweight custom seats and 6-point Schroth harnesses to allow the driver to literally become one with the car. This business-like workspace has been augmented further by KPM’s functional half cage and harness bar, offering both additional torsional strength and welcome crash protection. KPM also added a custom flocked dash and carbon rear door cards to reduce the weight yet further, and complete the ‘track ready’ look.

The last detail is the hardest to miss; the wrap. Designed and applied by one of Milltek’s talented motorsport contacts, it’s a clear statement of intent for the cars new-found role and abilities – a point proven when we joined the team for this shoot at a soggy Silverstone. Ably pedalled by Milltek’s test-driver, ambassador and GT wheelman, Tom Onslow-Cole, the sonorous Jetta proved to be a worthy foil for the assembled Porsches, Ferraris and R8s at the track, leading to more a than a few embarrassed faces in the more exotically inhabited pit garages. Proof then, that while an impromptu and unwelcome trip to a roadside ditch can often be the end of many tales of car modding, for some, given the right insight, investment and supporting cast, it’s only the beginning… 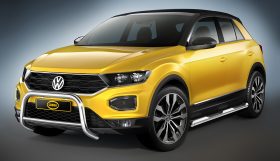 The Cobra Technology & Lifestyle accessories concept for the T-Roc